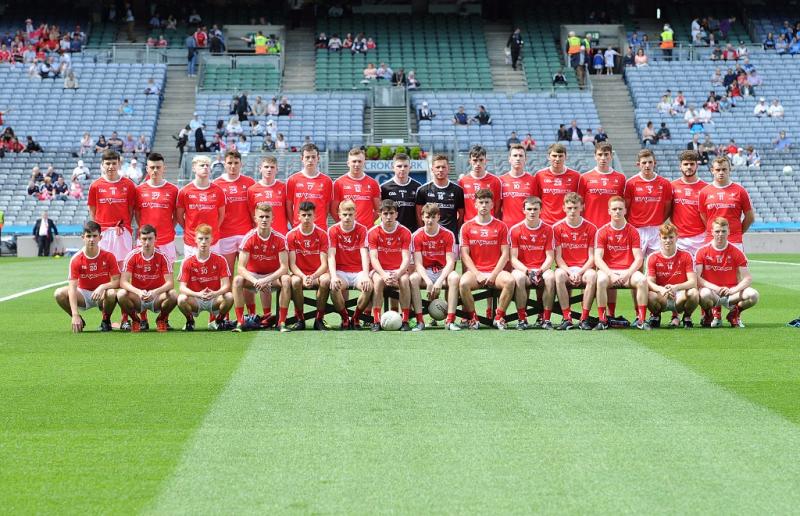 There was to be no perfect ending to their day at Croke Park for the Louth minors as Dublin claimed their 33rd Leinster title at the Wee County’s expense on Sunday afternoon.

Wayne Kierans’ men gave it their best shot, although Dublin were well worth their 13-point victory margin as they prolonged Louth’s 64 year wait for provincial glory at this level.

Having coped relatively well in the early exchanges, the Reds never recovered from the concession of two goals in the space of one first-half minute as Dublin powered their way through Louth’s stretched defence like a hot knife through butter.

The Dubs possessed more pace and power all over the pitch with wing-back Eoin O’Dea and corner-forward Ross McGarry among those to catch the eye. John Gallagher and Ciarán Keenan gave it their all in the Louth attack, contributing all but two of their side’s points, however, at no stage did the Reds look like mounting a comeback.

It wasn’t as if Louth failed to perform, or that the occasion got to them. Dublin were just the better and physically stronger, along with having an evidently higher skill set. It was striking how comfortable and composed the Metropolitan minors were in possession and on each occasion that a scoring opportunity presented itself; the Dubs were ruthless.

Their attacking patterns were much more cohesive to that of Louth’s and the fact that all six of Dublin’s starting forwards got on the scoresheet from play highlighted this aptly.

Dublin always seemed to have a runner coming off the shoulder on cue, while the Reds sometimes overindulged in hand-passing when they had opportunities to pull the trigger at goal.

It was a dangerous ploy and so it proved as both Dublin goals resulted from Louth handling errors around midfield. Both goals arrived in the seventh minute of play, a minute after Gallagher had opened Louth’s account with arguably the score of the contest from along the Hogan Stand.

The first major saw James Madden surge powerfully through the middle, as the Louth defence parted, to blast to the corner of the net before a subsequent handling error allowed James Doran to repeat the feat.

McGarry added his third-point in the next attack as the winners raced into an unassailable 2-3 to single-point advantage after a mere eight-minutes of play.

They would have bagged a third three-pointer had Alan McGauley not stooped bravely to deny the inrushing Seán Hawkshaw. His intervention would come at a cost though as the Ardee, St. Mary’s man picked up an injury which would see his Leinster final come to an abrupt end.

A brief rally saw Louth close the gap to five-points through Keenan (2) and a nice point from Fearghal Malone. Though, that would be as close as the Reds would come to scoreboard parity as the Dubs closed the opening-half with eight of the final nine-points; one of which came from man of the match Kieran Kennedy.

Despite performing best in the second-halves of their three previous Leinster outings; the second-half looked like a mission to salvage pride for Louth as they trailed 2-11 to five-points at half-time.

They began the second-half relatively well in registering points through Gallagher (3) and Keenan. They even managed to outscore Dublin in the third-quarter of the contest,

A fresh raft of replacements put the pep back in Dublin’s step for the closing phase though. Substitutes Ciarán Archer (2) and Luke Doran fitted seamlessly in by getting their names among the scorers.

Louth’s day was further compounded by Leonard Grey’s late black-card; a harsh decision which made you wonder if referee Patrick Maguire knew the concept of common sense with the Wee County an already well-beaten team.