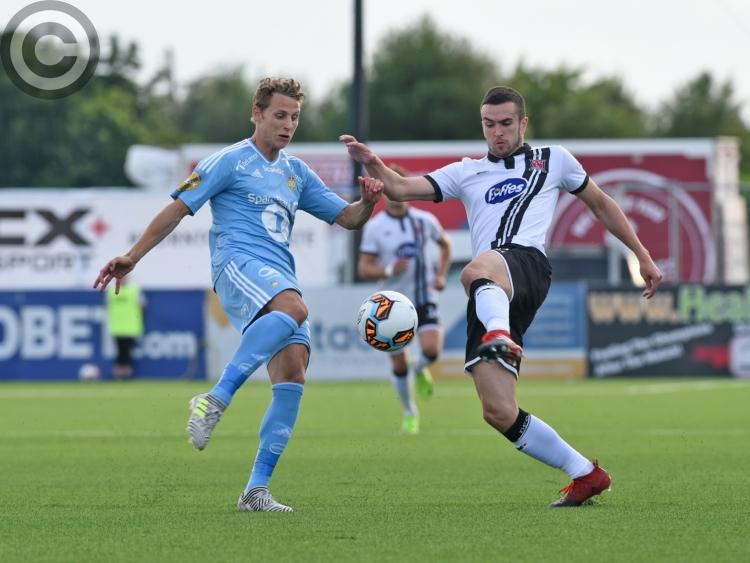 Dundalk's hopes of progression to the third round of the Champions League qualifiers remain firmly intact following tonight's 1-1 draw with Rosenborg at Oriel Park.

It was a game where Dundalk showed admirable bravery but, on a night where they were on the receiving end of marginal refereeing calls and a plucky visiting outfit, they had to settle for a draw despite David McMillan's seventh European goal for the club having put them in front after 18 minutes.

Norway international defender Tore Reginussen was to steal a share of the spoils for the visiting outfit a minute from the break though as he bundled a loose ball to the net.

The result, identical to last year's with FH, where McMillan also scored, gives Dundalk a genuine chance of progressing when the sides reconvene a week from tonight in Trondheim.

Stephen Kenny's men were superb on the night having went at Rosenborg like blood thirsty hounds from the off; pressing up on Rosenborg at a ferocious tempo, unnerving the Norwegian's shaky defence with barely a minute on the clock when Robbie Benson shot just wide after stirring work down the left-hand flank by Dane Massey.

Duffy and McEleney were dovetailing beautifully, while the work rate of Chris Shields and Benson in midfield was exemplary as The Lilywhites turned over possession time-after-time high up the pitch, particularly during a frantic opening-quarter.

Super work from Massey saw him transfer the ball to McMillan, whose chest down to Duffy produced another gilt-edged opportunity for Dundalk. However, the winger's sweetly struck left-footed drive was stopped superbly by Anders Hansen - a 'keeper who wouldn't inspire much confidence as the half wore on.

Kenny's players were completely controlling the contest and Rosenborg could hardly have complained when McMillan sent Oriel Park into overdrive with his 13th goal of the campaign. The forward glanced a scrumptious ball from Duffy to the net after an intense spell of attack from the home team.

There was a visible lift in the Scandinavian's tempo thereafter though as their skipper Mike Jensen and fellow midfielder Matthias Vihjalmsson grew into affairs.

Nicklas Bendtner was anonymous in the opening, but, out of nowhere, he almost levelled the tie when his deflected effort from the edge of the area forced Gary Rogers into a tremendous tip-over save.

While the Norwegians upped their intensity considerably, it would be unfair to say that Dundalk were left behind as the game developed. A miscued scissor-kick from Duffy could have doubled the lead after John Mountney had done trojan work down the flank while McEleney had an effort which sailed wide of the target

But, prior to going off, Pal Andre Helland forced Rogers into another top-stop before the visitors landed a sucker blow minutes from half-time as, after a scramble in the area, centre-back Tore Reginiussen bundled home. To compound Dundalk's misery, the free-kick which led to the goal - awarded against Mountney - looked to have been very harsh.

The second-half was a half of few chances although, considering the strenuous efforts of both teams before the break, it came as no great surprise.

Jensen (2) and McMillan traded efforts while substitute Dylan Connolly came close. However, the clearest-cut openings came at the death as both Brian Gartland and Ciarán Kilduff nodded off target.

On reflection, a draw is probably the fairest result, especially considering Jensen almost nicked the game for Rosenborg in the final attack only for desperate Dundalk defending seeing the ball clear.

The teams will meet for the second leg in seven-days time and on the basis of tonight, The Lilywhites are in with a big chance...