Strong finish from the Gers sees off Pats 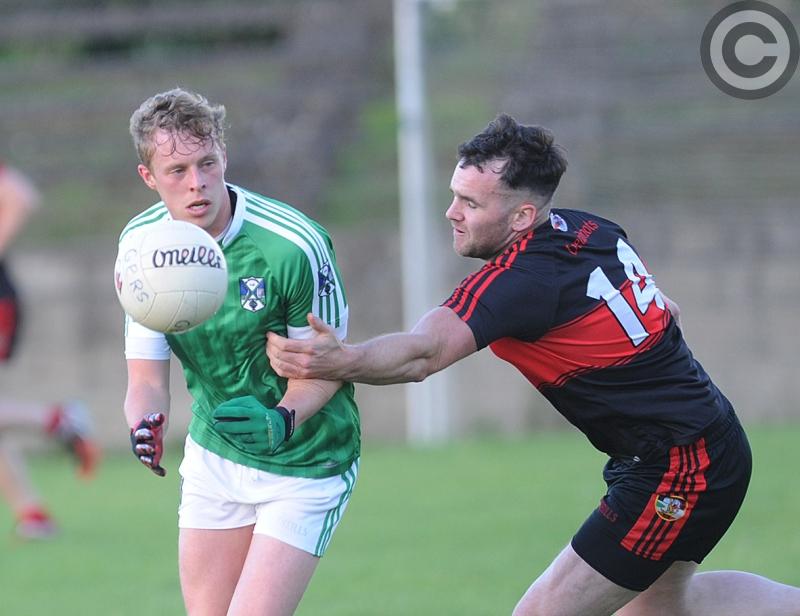 A stirring finish from the Geraldines, spearheaded by Jim McEneaney and Shane O’Hanlon, continued St. Patrick’s two-year wait for a championship group stage victory at Dowdallshill this afternoon.

It had looked as if the Pats’ dominant second-half spell was going to ensure they took the spoils, however, the Haggardstown men shot seven of the final nine-points, including six-in-a-row before full-time, to snatch the unlikeliest of victories.

While you couldn’t begrudge the Gers their victory, the Pats showed incredible naivety in allowing a game which they looked to have sewed up with 10 minutes remaining to slip from their grasp.

By conceding scoreable-free after scoreable-free, the Pats allowed their counterparts an entry-route back into the contest and they took it gleefully with McEneaney scoring five-points in the final 12 minutes to see them ahead before Shane O’Hanlon shot a superb brace on the breakaway to secure the spoils in the added-time.

The decision to play Paddy Keenan at full-forward was a strange move on manger Davy Nelson’s behalf considering he failed to get a ready supply of ball in the early stages. Indeed, the Gers’ strong start to proceedings had much to do with their control of the middle-third as Paddy Hoey and Nicky Mackin got on top.

Shane O’Hanlon and Josh Arrowsmith were the beneficiaries in the Gers inside line as they bagged a point each before the six-minute mark.

The upside to how the Pats set-up was the space they had to run into when they did get moving forward. Cathal Grogan had plenty of time to pick his point in opening his side’s account after four-minutes before Darragh Lafferty drew the game level following a miracle fetch and lay-off from Keenan.

Another sublime score from the Lordship men, this time through Keenan, put Nelson’s men in front for the first time prior to Jim McEneaney (free) and Danny O’Connor, in some style, trading points as the Pats continued to lead past the 20-minute mark.

However, O’Hanlon was to capitalise on a rare mistake from Pats full-back Dessie Finnegan minutes later to shoot a major past Sean Connor at the second-attempt.

It was a goal the Gers deserved considering the amount of possession they enjoyed in the opening-half and had Neil Jones showed more conviction after burrowing his way through a myriad of Pats defenders shortly before the break, the Haggardstown outfit would have been a further goal to the good.

Jones was alert to the rebound though, after Connor had saved his original effort, as he clipped over before McEneaney made it a four-point game with his second point of the half.

The Lordship men were to find a different gear either side of half-time, however, with the O’Connors, Eoin and Danny, integral. The latter and Keenan ensured their deficit was halved at the break before Aidan McCann and Eoin O’Connor tied the game level. At this point, the Pats looked the likelier victors.

O’Hanlon momentarily stemmed the Pats tide before a brace from Danny and a strike from Eoin saw the O’Connors gave the Lordship side an 0-11 to 1-6 lead as the match approached the third-quarter stage.

Robbie Lynch and McEneaney were to exchange points with Danny O’Connor (2) before Darragh Lafferty registered the Pats’ final score of the game with 10 minutes remaining; St. Patrick’s 0-14 Geraldines 1-8.

Despite their fate looking bleak, the Gers slowly edged themselves forward with McEneaney’s unerring accuracy from placed-kicks levelling the contest before the Louth star stroked over with style two-minutes from time in putting the Gers ahead for the first time in 22 minutes.

As tensions rose along the touchline, the Pats threw men forward to attack in search of an equaliser, however, having lost the ball twice, O’Hanlon punished them on both occasions as the Gers secured a famous victory.