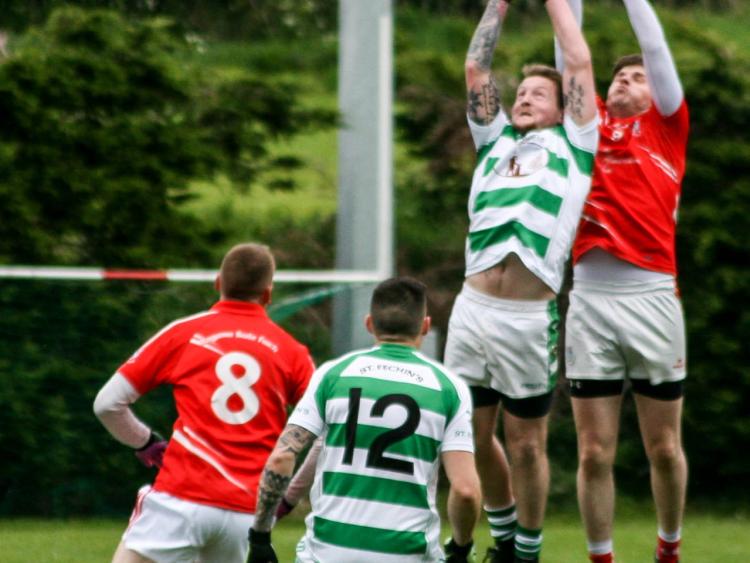 Hunterstown Rovers accounted for St. Fechin's for the second time this year tonight

Hunterstown Rovers ground out a deserved victory over St. Fechin’s in the second game of the double header in Stabannon tonight.

Glen Matthews’ fifth minute goal was the crucial score as it kept the Hoops at arms’ length throughout. However, as the second-half progressed, it looked as if the Termonfeckin men were going to complete an unlikely comeback as Joe Corrigan scored three minors in succession to tie the scores for the first time midway through the half.

Bevan Duffy’s black card 13 minutes from time proved crucial though as Hunterstown took control at midfield in the final quarter before outscoring the Hoops four-points to one.

While Rovers were full value for their victory, St. Fechin’s had enough chances to win two games but time-after-time their range let them down, particularly early on where they amassed seven wides before getting off the mark through Brian Devlin after 21 minutes.

Hunterstown had scored 1-1 by that point with Matthews’ goal coming from Alan Landy’s neat pass. They led 1-2 to three-points at half-time and, while St. Fechin’s spurned a host of glorious opportunities, Rovers were guilty of wasting several scoring chances too.

Their doggedness in defence was key as not once did a Hoops forward get a shot off unopposed. Indeed, both Paul Taffee and Brian Matthews hurled their bodies in the line of fire on more than one occasion during the second-half.

Landy and Brendan Lennon registered points shortly after the break to extend Rovers’ gap to three-points, but a period of 11 minutes without a score saw the Hoops draw level, with Corrigan their scorer-in-chief.

Duffy’s black card appeared to stem his side’s comeback as Rovers finished with a flurry of points from Carrie, Glen Matthews, Landy and Mooney to ensure they top Group Four heading into next week’s game with St. Mochta’s