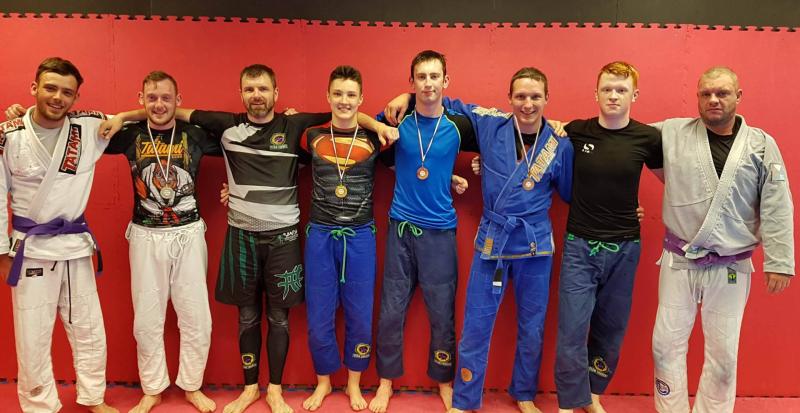 Last weekend, nine intrepid members of the Dundalk Team Torres Brazillian Jiu-Jitsu Competition Team made their way to Cherry Orchard in Dublin to compete in the Ryoshin MMA Submission Championships.

First up to compete was the teams youngest member sixteen year old Martin O'Donnachadha who due to an administrative error by the event organisers had to fight in the adult division instead of the teenage division for which he had registered, however, undaunted young O'Donnachadha proceeded to dominate his older opponents, winning both the quarter and semi-finals by submitting his adversaries by 'footlock'.

The action packed finals proved to be quite a nail biting affair with the fight going to extra-time and much to the delight of the spectators and his team mates, O'Donnachadha, despite having broken his big toe in one of his earlier fights, quickly submitted his opponent with an 'inverted armbar' to claim Gold and the first medal of the day for Team-Torres.

Not to be outshone Darren Mackin, one of the Dundalk Teams most skilful fighters, had three tough matches - winning two in overtime and one by 'straight ankle lock' to claim a well deserved gold medal.

Ruairi O'Murchu, who has developed a reputation as an opponent who is difficult to beat, experienced some early success but was unlucky on this occasion to not make it to the podium, as was his team mate Carl McAteer who, having only recently been promoted to Blue Belt nonetheless, entered the competition to test himself in the higher division in the knowledge that he would be going against some very experienced high level grapplers.

Kyle Keating had an outstanding day winning three fights to make it to the finals, executing some impressive takedowns along the way. In the finals he faced off against a Team-Torres team mate from Newry Martin Rushe and on this occasion had to settle for silver.

For Matthew Monahan, this was only his second competition where he was drawn against much more seasoned grapplers. Matthew continues to improve his skill set and it is only a matter of time before he takes a podium position.

Tom Lawlor having taken up the sport very recently entered the competition to gain some valuable competition experience and is certainly one to watch for the future, as is fellow competition debutante Glenn Shields who took silver in his section.

Last up was Blue Belt Mantas Ambraziejus who was competing in his third competition in less than two months and who, as expected, yet again made it to the podium, this time to add a bronze medal to his growing medal collection.

Speaking after the event the Dundalk Competition, team coach Andrew McGahon lavished praise on the overall performance of the team and reflected on the growth of the Dundalk competition team where last year there would have been typically only one or two competitors representing the town. He stressed that there is no requirement for club members to compete and in actuality only a small percentage of the members do, with the vast majority, who range in age from 13-to-52, attending the class for the physical and mental benefits of training in the gentle art of Brazillian Jiu-Jitsu.