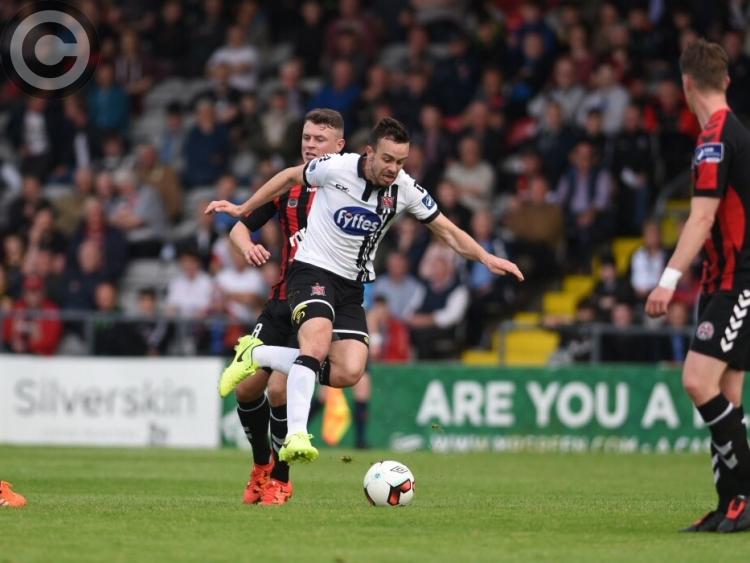 Ciaran Kilduff produced the goods when Dundalk needed it most at Dalymount Park tonight as his 125th goal in league football helped Stephen Kenny's men to a scarcely deserved three-points courtesy of a 1-0 win.

The striker rose highest inside the six-yard box to nod Jamie McGrath's enticing cross past the helpless Shane Supple a minute from time as the champions maintained their five-year streak since last losing a league game at the Phibsborough venue.

Bohs can feel harshly done by though as a point would have been the least they deserved. As the visitors struggled to put concerted passages of attack together, Bohs missed several glorious opportunities to go ahead, none more clear cut than Dinny Corcoran's miss on 64 minutes where he headed over the top from a wonderful Keith Ward cross.

In the end, though, Bohs were made to pay as substitute Kilduff landed the 'killer blow'.

Dylan Connolly was given his debut by Stephen Kenny, on the left wing, but his performance was somewhat symptomatic of Dundalk's in general with several misplaced passes and a heavy first touch hindering many of his attempts to get at Derek Pender, the Bohs right-back.

Indeed, up until the veteran defender went off on 37 minutes through injury, Pender had Dundalk's new signing well under wraps.

The first-half was a dour affair with a mere one shot on goal from either side; that being a speculative 25-yard effort from Dane Massey which rose harmlessly over Supple's goal.

Bohs probably looked the likelier on the breakaway, although Dundalk held the lion's share of possession in midfield with Patrick McEleney frequently gaining possession.

The clearest opportunities of the opening-half arrived for the hosts with Keith Ward twice spurning chances to thread a final pass through. Corcoran was awaiting the supply on both occasions, however, Ward's hesitation saw the first chance close before a poor final ball meant the second opportunity went abegging.

Those apart; the first-half was grim viewing on the attacking front.

Dundalk's intensity visibly lifted after the break, however, Bohs remained the more threatening with Corcoran having the game's clearest opening on 64 minutes when heading a Ward cross narrowly over the bar. The home side's direct approach was proving highly effective, especially following the introduction of Izzy Akinade who complimented Corcoran in attack.

For all their passages of intricate play, The Lilywhites had no end product with their final ball letting them down on countless occasions. Seán Gannon in particular had a poor night on the delivery front.

McGrath and Michael Duffy were introduced as Dundalk upped the ante in the closing moments with Niclas Vemmelund drawing a top-class save Supple before Bohs hearts were broken by former Shamrock Rover Kilduff.

The gap to Cork is down to single-digits - nine-points.