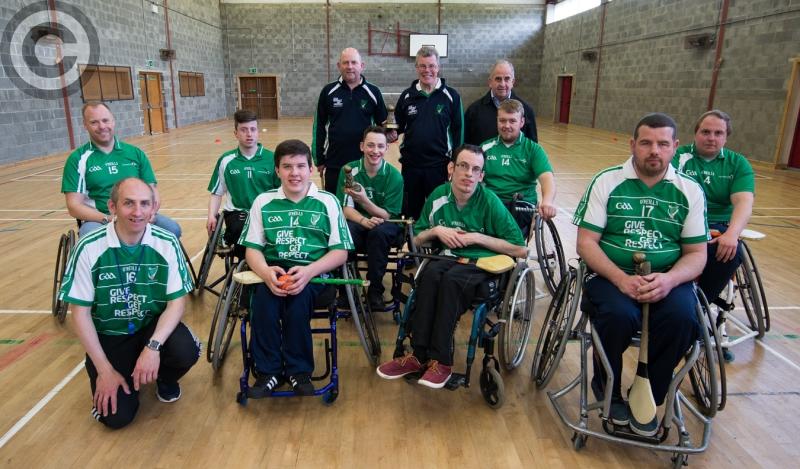 Wheelchair Hurling is growing in popularity, and a handful of Laois men are leading the Leinster's success at the moment. We caught up with them recently to find out more.

The community hall in Vicarstown is not often graced by hurling All-Stars, but it was recently.

The Leinster wheelchair hurling team had a training session there a couple of weeks back, and the reigning All-Ireland interprovincial champions are replete with three All-Stars, not to mention a few on the sideline as well.

The team are coached by Jeff Phelan, a Portlaoise man, who along with Tom Sheehy and Gerry Pierce won the coaching All-Star awards.

Having previously worked in banking, and then the ESB, Jeff's love of coaching eventually lead him back to college, initially in the GAA coaching courses in IT Carlow, before he headed to study PE teaching in the University of Limerick.

Wheelchair Hurling wasn't on his radar until a fellow club man, Peter O'Neill, put him in touch with Tony Watene, the GAA's National Inclusion Officer, a couple of years ago.

"I met him in Portlaoise" recalls Jeff. "He asked me to get involved with the Leinster set up, and I've been there ever since."

It was a learning curve for Jeff, whose experience of coaching wheelchair sports only extended to different modules of his PE course in UL. He loved hurling though, and he loved coaching, so that was a strong base to start from at least.

The game was initially invented back in the 1990s by a teacher called Tim Maher, who worked in a school in Baldoyle for students with physical disabilities. Wheelchair Hurling might sound like a gentrified version of the field game, but that far from being the case.

The emphasis is on speed. It is lift and strike, there is no soloing with the ball, and you can only score goals. The pace is hectic, and the sport has been growing since it got it's own interprovincial series five years ago.

Ciaran Cushen, a Stradbally man, is a member of the Leinster team. While the game is relatively new to many of the squad, Ciaran is as close as you can get to a veteran. "I was one of the first to take part in the game, I started playing in 1998 when it was originally thought up.

"I played in my first competition in 1999, there were five schools in Dublin playing it back then, I was a student in the school in Baldoyle (where the game was devised) at the time.

"I'm back playing for the last two years, I stopped playing after I left school in 2003 because there wasn't much hurling down this end of the country, it was mostly in Dublin. With the changes, it has come a long way from when I started. It is faster now, and it is a bit more structured, which is great to see."

While the game has come a long way, there is still scope for improvement. Currently, there is only an interprovincial series, with no county or club teams yet in place. "Wheelchair Basketball has a lot clubs" outlines Jeff. "There are no clubs or county teams for wheelchair hurling, but that is possibly the way it will go. We have people coming to train from all over the province, and it can be hard to get everyone together at times."

At the moment, every province takes turns in holding a blitz, where each province then plays each other on the day. The blitzes take place every month or two, and Leinster are currently top of the standings, having won all three of their games at the first blitz of the year.

Games are 21 minutes long, split into three seven minute periods. As outlined above, the games are not for the faint of heart. They are keenly contested and physical as well. For some it could turn them off, but for Ciaran Cushen, therein lies the attraction. "The game is very, very fast, you only have a split second to make a decision.

"If you get hit, there's no point in giving out. I love the physicality of it, I'm not saying I'm going out to hit anyone, but you can't be afraid of getting hit. You just have to get on with it."

For anyone who finds themselves in a wheelchair, for whatever reason, Phelan was keen to point out that there is still a sporting outlet for them to represent their province at a high level. "I love it (the coaching), and it is great to get players of different ability out and representing their province.

"They all get to play a game they really enjoy, and you couldn't ask for any more than that."

As for Ciaran Cushen, he knows that he might not have many years left playing, as he also plays wheelchair rugby, but he plans on staying involved in some capacity when he does hang up his hurl. "I'm 32 now, in the next few years I'll have to give up playing.

"I would like to stay involved in coaching or something like that when I stop playing, I'm wouldn't be great for staying at home and doing nothing."

The Leinster panel currently numbers eleven, and Jeff Phelan is hoping to boost that number and get more involved. For anyone thinking of it, Phelan is urging them to get in touch, because there are big rewards involved. "We are trying to promote awareness of the sport, and get more players involved, because we would be delighted to have them.

"It's a very enjoyable and very exciting sport to play. For people with a disability, it is a chance to represent your province and maybe win an All-Star or an All-Ireland. Some people might have thought that chance was gone, but that is not the case."