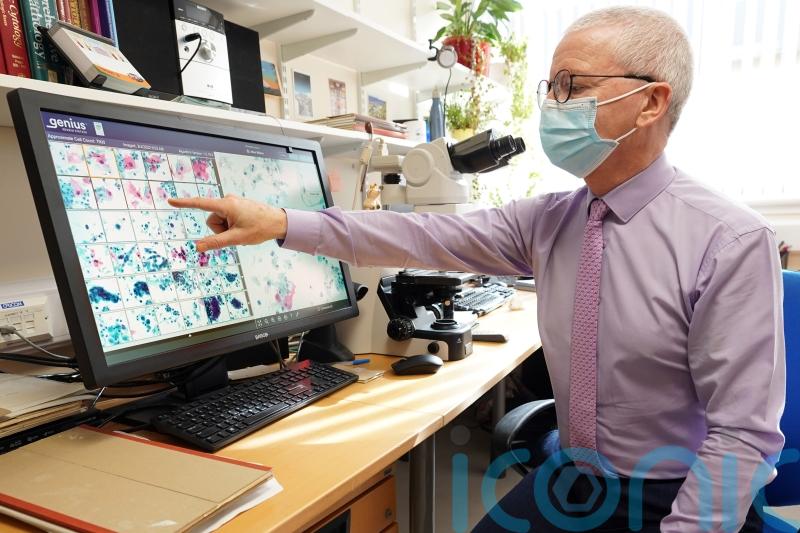 University Hospital Monklands in Airdrie said it has become the first hospital in the UK and one of the first in the world to pilot the technology as part of its cervical screening programme.

Health experts said the new technology could be instrumental in ensuring earlier detection of pre-cancerous cells and cancer cells and has the potential to save lives.

For the pilot programme the system will create digital images of cervical smear slides from samples that have tested positive for Human Papilloma Virus (HPV).

These images of test slides can be rapidly reviewed using an advanced algorithm, which assesses the cervical cells in the sample and provides the screener with an image gallery of the most diagnostically relevant cells.

This helps medical experts more rapidly identify and accurately diagnose abnormalities as they have fewer cells to analyse.

Allan Wilson, consultant biomedical scientist at NHS Lanarkshire who is leading the pilot, said: “Looking for abnormal cells is like trying to find a needle in a haystack because in some cases there are only around 50 abnormal cervical cells in a sample that may contain 15,000 normal cells.

“This pilot with Hologic has shown how digital cytology can revolutionise our analysis process in our cervical screening programme.

“Preliminary results from the pilot are promising, as the team at University Hospital Monklands has increased capacity by around 25% in the slide assessment and improved analysis turnaround times, as well as allowing screeners to dedicate more time to training on the latest technologies and dealing with difficult-to-diagnose cases.

“We are now undertaking a retrospective study, using the digital cytology system to test its performance against previous known results.

“This will then provide the clinical data to make a recommendation on the use of digital cytology in the cervical screening programme in Scotland.

“Through artificial intelligence (AI) and digital diagnostics, we have the potential to improve outcomes for women not only in Scotland, but around the world.”

News of the pilot comes as International HPV Awareness Day is marked around the world on March 4.

Three hundred women in Ireland are diagnosed with cervical cancer every year.

In the UK more than 3,000 women are diagnosed each year, with six women diagnosed in Scotland every week, according to data from Jo’s Cervical Cancer Trust.

“The earlier they are diagnosed, the less invasive treatment might be. Anything that improves or speeds up this process, which in turn could improve, outcomes for women and people with a cervix is a hugely positive thing which we want to see explored fully.”

Tim Simpson, general manager of Hologic UK & Ireland, said: “Digital cytology has a key role to play in ensuring pre-cancerous cells are picked up early and treated so fewer women go on to develop cervical cancer.

“Our goal is to help create a world where no woman dies from cervical cancer.”