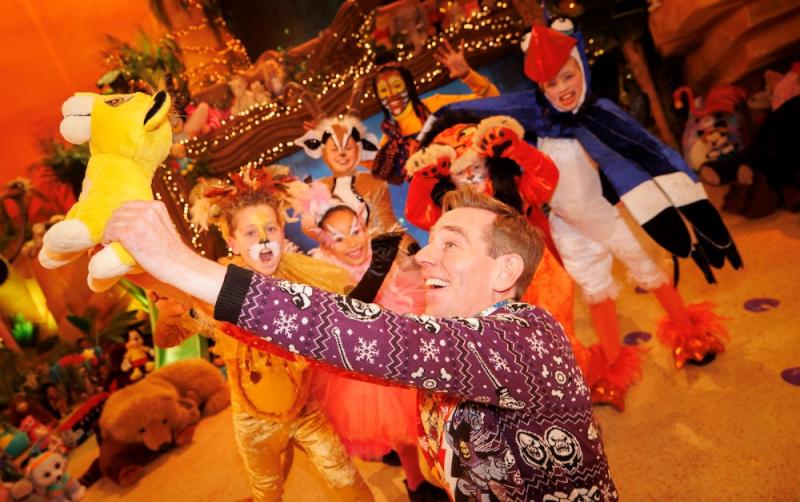 From Robbie Keane to Ed Sheeran - we look back at the most memorable surprise Toy Show guests (Image: Andres Andres Poveda)

It's the most wonderful time of the year... the night the Late Late Toy Show screens on RTE One.

The Toy Show is a uniquely Irish event that falls on the last Friday of November every calendar year, and it is deeply embedded in our culture.

It is popular amongst children and adults and generates festive cheer in every Irish household bringing a sprinkle of magic across the country.

Each year there are guest appearances from many people ranging from celebrities to local heroes and family members of the participating children, you're sure to see a familiar face or two!

Toby appeared on the Late Late Toy Show in 2003 and was surprised by mega girl-band Girls Aloud when he was performing their song on a Karaoke machine.

Little Toby was stunned to see the pop group in person.

Aimee Keogh was speaking about her love for music when showing Ryan Tubridy a Karaoke Machine, and included Ed Sheeran in her list of favourite artists.

Ryan Tubridy and Aimee began to duet 'Lego House' by Ed Sheeran, when she was surprised by the man himself.

Starstruck and surprised by his appearance, she began to sing with Ed Sheeran on the Karoke Machine.

Mr. Sheeran surprised her with tickets to his concert in London that year.

A group of three children sang 'Superheroes' by the Script on the Late Late Toy Show in 2014 as they were big fans of The Script.

The band were surprised by lead singer Danny who thought their performance was 'amazing' and said they would give The Script a 'run for their money'.

Mr. O'Donoghue invited the boys to perform at their soundcheck in Croke Park that year.

Domhnall appeared on the Late Late Toy Show in 2013 and spoke about his hero Robbie Keane and listed out several facts about the soccer star.

It was evident Mr. Keane was his role model as he had a vast knowledge about him, his career, and his recent injury that year.

Domhnall was overwhelmed when Robbie Keane surprised him on set and he was allowed to ask questions about his career.

Johnny charmed viewers when he spoke about his passion for the weather and his admiration for Evelyn Cusack who presents the weather on RTE One.

He told Ryan he plays a game called 'Whos it going to be' for the weather forecast and always hopes it is Evelyn, he also invented a board game called 'Aimsir'.

Evelyn Cusack surprised him on set, and Johnny was thrilled to see her.

Michael was very professional and continued singing despite the shock and surprise sketched on his face.

It was a truly heartwarming moment that uplifted the viewers as we battled our second lockdown last year.

One of the most iconic moments in Toy Show history, Michael won the hearts of the nation when he appeared on the Toy Show.

He revealed his favourite GAA manager was Davy Fitz and joked that he did not think they would get along as he was from six-mile bridge.

Dvy Fitz walked out and surprised Michael, who was bewildered by his appearance.

He asked Mr. Fitz to sign his book as he had brought it along with him (Michael did not know he would appear that night).

Davy invited Michael to speak to the Wexford team before their league matches.

While many celebrities drop by to say hello to Ryan and the children, family members also make an appearance. These are sure to warm your heart, and no doubt tonight will add to the list.

Tom stole the show in 2019 when he was surprised by his Nanny Pat on set of the Toy Show.

He previously said he liked to knit with his Nanny Pat and she gave the best hugs.

The two embraced with a warm hug and smiles all around.

A very heartwarming moment in 2019.

Adam and Kayla Burke from Midleton, Co Cork were reunited with their dad Sergeant Graham Burke in a heartwarming reunion.

Adam and Kayla unwrapped a giant present where their Dad was hiding, both children had tears of joy when he emerged.

Graham returned from Mali where he has been completing his 6th tour of duty peacekeeping overseas.

Ireland was introduced to the lovely Adam King last year, and the nation was besotted with him.

During his segment on the Toy Show, Adam's favourite hospital porter surprised him on set and Adam gave him a virtual hug.

John said Adam brings the best out of everyone he meets and he had the brightest smile.

Lee and his family were surprised by their big sister Alex who came home from Australia for Christmas.

It was an emotional reunion as Lee had not seen his sister in three years and embraced her in a big hug.

Many more memorable appearances have occurred throughout the history of the Late Late Toy Show, and tonight will be no different.

The list continues to grow with every show, and it really is the most wonderful time of the year.