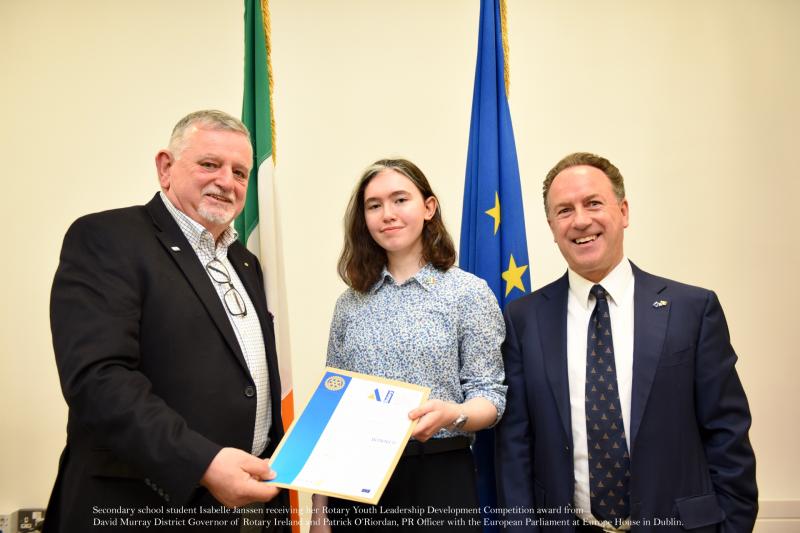 Dundalk Grammar School student Isabelle Janssen was one of just 14 teenagers from across the country to be conferred with a Rotary Youth Leadership award at the European Parliament’s offices in Dublin recently.

The competition, which is one of Rotary Ireland’s longest running youth projects, rewards young people with clear leadership potential based on their extra-curricular activities. It is run in conjunction with the EU offices in Dublin and Euroscola in Strasbourg.

Before the competition, Isabelle who’s from the Netherlands was involved in creating an exhibition to appeal to youth at the Van Abbe Museum.

She is currently Chairperson of her school's Student Council, contributes to and edits a newspaper with former classmates and is represented her school at this year's Young Economist of the Year competition.

She said she picked up valuable research and presentation skills from participating in the competition.

“This competition has helped me develop useful presentation and interpersonal skills, while also enabling me to make many new friends from all over”, Isabelle said.

“Additionally, the competition allowed me to explore two great cities together with the other participants.”

Usually, the award winners enjoy an exciting, six day, all expenses paid, team building trip to Belfast, Dublin and Strasbourg. This includes visits to The Titanic Centre, a tour of Stormont, a visit to the European Parliament offices in Dublin and a tour of Dail Eireann.

Participants then fly out to Strasbourg for the highlight of the trip, a full day of debating a variety of motions at Euroscola at the European Parliament with about five hundred other students from all over Europe. On the final day the winners enjoy a sightseeing trip around Strasbourg.

Unfortunately, this year due to Covid the Strasbourg element and some of the tours did not proceed.

However, the group did visit The Titanic Centre and City Hall in Belfast and went on tours of Dublin Castle and Trinity College in Dublin. The final part of the trip was a visit to the EU’s Dublin office, Europe House and a showcase event in The Freemasons Hall in Dublin city centre where the students presented on a range of issues to a panel including Green MEP Ciaran Cuffe.

Some of the topics the students presented on included European Security, Climate Change and the Environment, and Migration.

David Murray, District Governor of Rotary Ireland said the standard of the presentations was hugely impressive.

“I have to compliment Isabelle and all of this year’s winners for the extremely high standard of their presentations.

“This year the programme was unfortunately curtailed due to covid but the response of this group to that and everything else covid has thrown at them has been really impressive. “The resilience and enthusiasm they have shown in their local communities and during this programme reflects so well on all our young people.”

“Hopefully the full programme will be back up and running next year and I would urge as many young people as possible from every part of the island to take part” Mr Murray said.

The Rotary Youth Leadership Development Competition is open to 16- and 17-year-olds who are living on the island of Ireland.