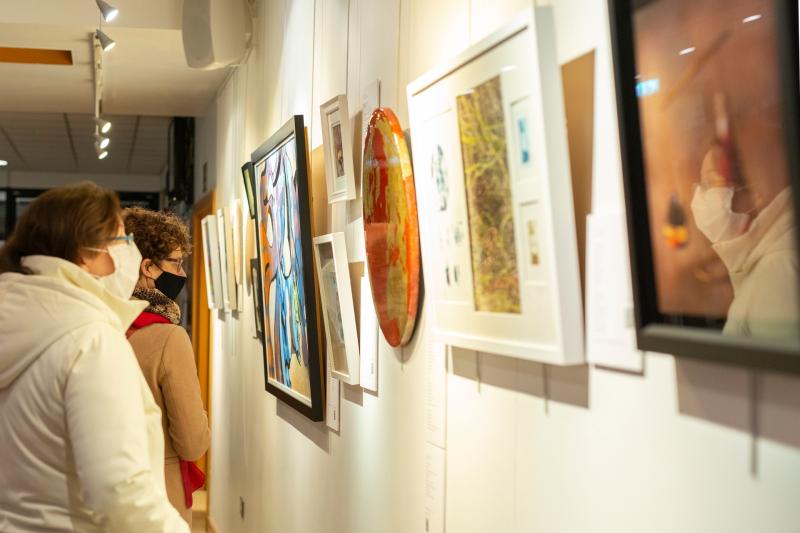 The launch of the collaborative exhibition ‘Awash With Colour’ in the Íontas Theatre, Castleblayney took place last Thursday.

The exhibition contains over 90 original pieces of work from 21 artists from AAEX Dundalk (Artists as Exchange) and 17 writers from Moposogs (Monaghan Poets and Songwriters Group).

This is the result of a collaboration between the groups which saw individual writers and artists exchange work to bring forth inspiration and new creative pieces.

A series of three lengthy zoom meetings enabled all artists to share their new compositions with their partner from the opposite group.

It was realised very early on that this project was far more than a call and response and had huge potential to be brought to a wider audience.

Spearheaded by Dara MacGabhann leader of the Monaghan Poets and Songwriters Group and Caoimhe O’Dwyer and Julie Corcoran from AAEX the project literally took legs and was offered exhibition and performance space in the Íontas Theatre Castleblayney.

Despite the current restrictions and the wet weather, a substantial audience of 60 to 70 art and literary lovers assembled in the Íontas Theatre foyer to brose the 47-art works and their corresponding written pieces.

The first thing one is struck by with this exhibition is the variety of the artistic work on display, from large scale oil paintings to ceramics, watercolour, mixed media and so much more.

Once guided into the auditorium it was obvious the written work was equally as diverse. An additional feature of this exhibition is the QR codes on each of the written pieces. Viewers are invited to scan the code and listen to the recordings of the songs, poems, and stories on their own headphones.

A 90-minute performance from 11 of the Monaghan writers took place before a seated audience.

Caoimhe O’Dwyer welcomed everyone and gave particular thanks to Dara MacGabhann and the Moposogs Group.

Dara was MC for the performance and kept the flow moving along during the change over of performers. Moposogs members showcasing their work on the night were Angela McCrossan, Andy Hogg, Roseanna Myles, Enda Brenna, Dara MacGabhann, John Nutley, Seán Ó Mairtín, Miffy Hoad, Enda Reilly (on zoom from Detroit), Ciarán Redmond and finally Seán Ó Roideain, who had the crowd clapping along to his lively ’Cousin of Mine’ song. Each piece performed had the corresponding artwork displayed behind them on the large screen providing the audience with a sense of where the inspiration was coming from.

The event ended with thanks to all involved from both groups particularly Berhard Gaul leader of AAEX, Andy Hogg for compiling the SoundCloud, Miffy Hoad, John Nutley and Andy from Moposogs for the written information boards for each piece and all from AAEX who assisted in hanging the exhibition.

Thanks were also given to Julie Corcoran for creation of the website and logo, and Seán Ó Mairtín for his tireless work on the technical end of the performance, Louth County Council Culture Night Fund, Monaghan Arts Office, Dundalk FM and of course the staff and management of the Íontas Theatre in particular Jaki and Carl.

The exhibition will run until the 11th of January in Íontas. For details off all participating artists and writers, radio interviews, future exhibitions and to view the pieces log onto www.awashwithcolour.ie