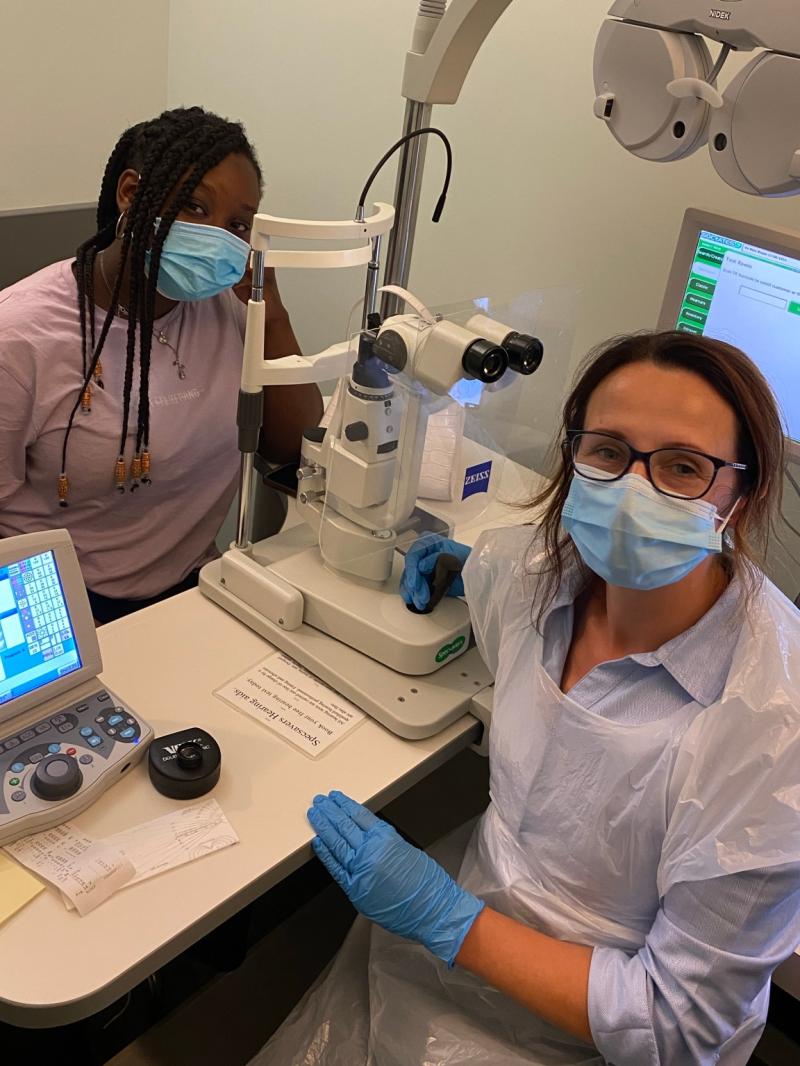 A visit to Specsavers Dundalk proved to be lifesaving for 19-year-old Neche Okolo when her optometrist discovered symptoms of a blood clot in her brain.

Neche was admitted to hospital in January after experiencing a sore neck, nausea, and persistent headaches.

As things improved, she was discharged with a suspected viral infection.

However, her symptoms began to return, only this time Neche was also experiencing blurred vision and her left eye was drifting to one side.

She called Specsavers Dundalk for an appointment with her community optometrist where she was seen by Martina Kelly.

After reviewing her symptoms, running some tests and performing a full eye examination, Martina knew Neche needed an urgent referral to the Mater Hospital Eye Clinic.

“It was evident to me on meeting Neche that something wasn’t quite right. Her left eye was very much drifting to one side, and she appeared to be in quite a lot of pain. I tried to reassure Neche as I referred her to hospital straight away for further examination,” says Martina.

After several MRI and CT scans, it was confirmed that Neche had cerebral venous sinus thrombosis, a condition that can cause a stroke in the brain and affects only one in a million people.

Thankfully, Neche’s condition was picked up, and she was referred for urgent treatment and care.

Had it not been picked up, it could have been a very different outcome and Neche knows it:

“I am so incredibly grateful to Martina for quickly detecting my condition and acting so fast in referring me to the Mater Hospital. Her professionalism and expertise in approaching the situation were incredibly reassuring. She was so calm and supportive through it all, and this helped stop me from spiraling out of control. I am eternally grateful to Martina and Specsavers Dundalk for potentially saving my life.”

Neche now wants to share her story to encourage people to take a proactive approach to their eye health and show that eye tests are much more than just about whether you need glasses or not. She also wants to stress the importance of paying attention to a sudden change in vision and the need to act fast:

“I’m now telling everyone to make sure they get their eyes tested,” she says.

Martina, too, is stressing the importance of regular eye checks:

“It’s important that anyone noticing a change in their vision gets it seen to right away. While usually this is down to a change in prescription or from our eyes feeling tired, in other cases it can be something more serious. If you have any concerns about your eyes, especially with a sudden change in your vision, make an appointment as soon as possible. Don’t delay.”