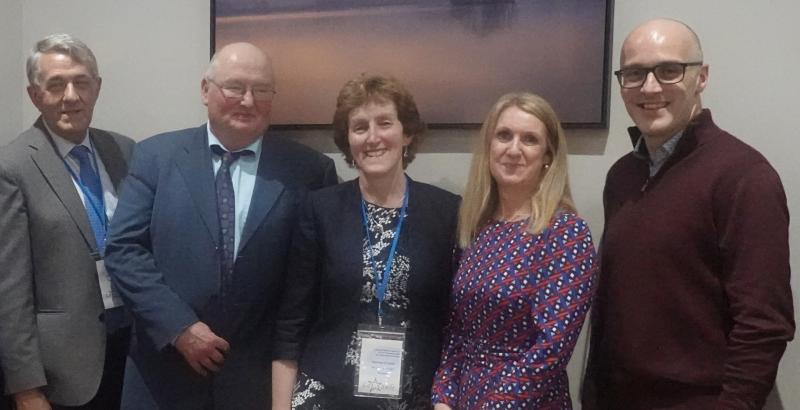 The former Principal of De La Salle Dundalk, Patricia O’Leary, was honoured for her commitment to teaching and the Lasallian values over a period of almost four decades.

Patricia was the guest of honour at the Lasallian School Leaders in Conference in Mullingar where Provincial of the District of Ireland, Great Britain and Malta, Br. Ben Hanlon, made a special presentation as a mark of appreciation.

Br. Ben thanked Patricia for all her efforts down through the years as a teacher who lived and shared the Lasallian values. He wished her all the best in her retirement while expressing the hope that she would continue to be involved with the District in the future.

Nicola Connolly, who succeeded Patricia as Principal, also paid tribute for all the great work she had done over the years, how she provided great support in her role as Deputy Principal, while continuing to be as source of guidance in her new position.

Mrs O’Leary expressed her thanks for being invited to the event and reflected on her 37 years as part of the Lasallian family, including ten as Principal.

She spoke about the influence her family had in her formative years, including her uncle Br. Celestine, and also her husband, Dan, and sons, for the support they gave her.

Patricia outlined how she felt very much at home in De La Salle Dundalk from her first day and how it was very much a team effort with a great community feel.

The Lasallian Ethos was always evident and being at De La Salle Dundalk felt much more than being at work.

She added that it was wonderful to see so much work being done at present to sustain the Lasallian Ethos and Mission, and wished everyone success in the future.