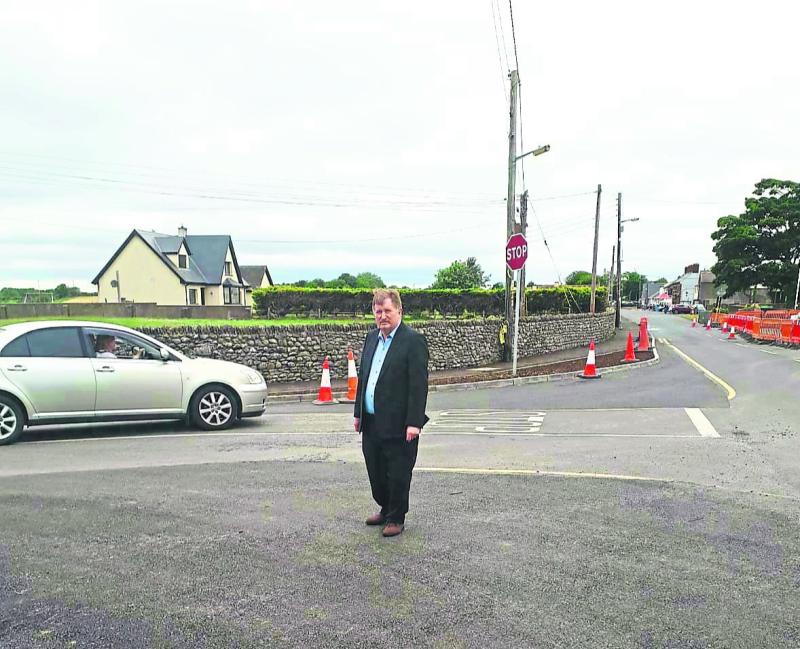 Cllr Pearse McGeough at the newly realigned junction at Slans

Two Ardee Municipal District cllrs raised concerns about the cost of the twice realigned Annagassan junction next to Slans pub, with the council reporting the first realignment cost €15,000.

Fianna Fáil’s John Sheridan and Sinn Féin’s Pearse McGeough both raised the issue in motions at the October meeting of Louth County Council.

In response to the motions, Director of Services Catherine Duff revealed that the cost of the first realignment of the junction cost €15,000, while the second was provided for within the construction contract due to the narrowing of the road with additional footpaths.

According to Ms Duff, the realignment was supposed to help with speed reduction measures.

The first realignment took place in November 2020, while the second alignment was done in June 2021.

A report compiled for Cllr Sheridan shows that concerns around the junction realignment were first raised in early 2021, where long vehicles had issues making the turn from the main road onto the side road.

According to the report, despite video evidence showing long vehicles facing difficulties on the junction, the original designers of the realigned junction said it addressed issues and that it was designed within the guidance documents and standards.

Sinn Féin Cllr Kevin Meenan said that the junction became a local tourist attraction due to its poor state, while Independent Cllr Maeve Yore labelled it as a waste of money.

Chief Executive of Louth County Council, Joan Martin, said that it was inevitable that LCC would make mistakes on some projects, particularly when a majority of staff in the council are working remotely due to Covid-19.