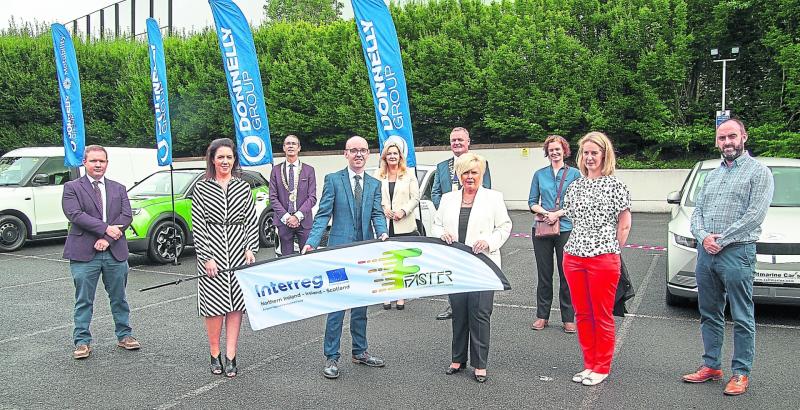 Gina McIntyre, CEO of the Special EU Programmes Body, with members of the FASTER project

The FASTER Project will provide much needed electric vehicle charging infrastructure with the installation of 73 Rapid Charging Points across Northern Ireland, the border counties of Ireland including Louth and Western Scotland with €6.4 million funding under the EU INTERREG VA Programme, managed by the SEUPB.

The project will help to reduce reliance on fossil fuels by encouraging increased use of more environmentally friendly forms of transport and also seeks to address some of the barriers to greater public uptake of electric vehicles.

The FASTER EV charging network will be installed on a phased basis over the next 18 months supported by a series of public awareness and community engagement events, promotional campaigns and initiatives to address public concerns with existing charging infrastructure and producing materials to support the transition to low emission vehicles.

The Consortium are also working with a range of Local Authorities across the three jurisdictions to identify suitable locations for this much needed infrastructure which will help revolutionise public charging for Electric Vehicles.

Welcoming the project, Ireland’s Minister for Transport, Eamon Ryan said: “Electric vehicles play a vital role in decarbonising our transport sector. The rollout of 73 rapid charging stations, as part of the EU INTERREG VA programme, will further incentivise the switch away from fossil fuel vehicles and will benefit drivers across all three jurisdictions.

“We look forward to working with SEUPB and our Partners in the implementation of this project.”

Outlining the importance of the project, Gina McIntyre Chief Executive of the SEUPB said: “Transport, on both sides of the border, is dominated by car usage, which is only increasing as our population grows. This is not sustainable as the stark realities of irreversible climate change are becoming more and more evident across the world.

“This new EU INTERREG VA-funded project will create a readily accessible cross-border infrastructure that will encourage increased use of electric vehicles. It will help to address many of the issues that discourage people from using this form of transport and contribute to a reduction in harmful carbon emissions that have such a negative impact upon our environment. I really look forward to hearing how this very important cross-border partnership progresses over the coming months ahead.”

Speaking at the official launch of the FASTER Project, Cllr Kyle Savage, Chairman of East Border Region stated: “East Border Region are delighted to be Lead Partner on this innovative project which will provide much needed EV charging infrastructure across the three jurisdictions. This project clearly demonstrates the effectiveness of cross border collaboration between a range of key stakeholders, and the benefits to be gained by adopting a strategic approach to sustainable infrastructure development”