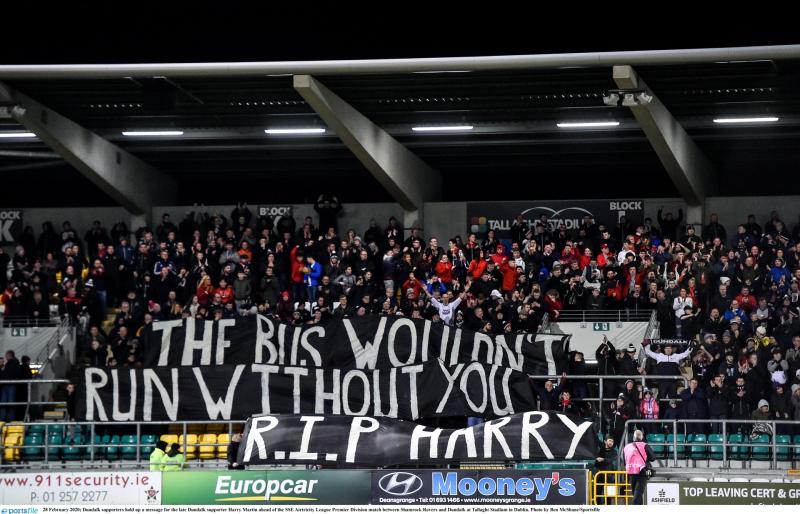 Most of the stories relating to Harry Martin, whose sudden death took place the week before last at the age of 57, focus on his support for the Dundalk soccer team. (Pic: Sportsfile)

Most of the stories relating to Harry Martin, whose sudden death took place the week before last at the age of 57, focus on his support for the Dundalk soccer team.

Understandable. Harry was an avid Oriel Park fan, rarely missing a home or away game – and what a fine tribute to him by his colleagues with the unfurling of a huge banner in his memory at the Shamrock Rovers game in Tallaght last Friday week. He’d have approved of that and, no doubt, the goal Jordan Flores scored in the second half that night.

But there was another facet to Harry’s career. He was, as they say, a greyhound man, practicing as an owner but most prominently as a racing manager. He pieced cards together first of all at the old Dundalk track on The Ramparts, and then Ballyskeagh, the name given to the new track that opened in Lisburn soon after the closure of Belfast’s iconic Dunmore Stadium. Ballyskeagh has since had a change of name, and is now known as Drumbo Park.

On becoming a grader, Harry was doing nothing more than following in a great family tradition. He wouldn’t have wanted for advice. His father, Jimmy, had no peers in his role as racing manager, and it’s still spoken about the integrity with which he went about his task, and, indeed, the role he played in the track enjoying outstanding success over a long number of years, especially in the 1970s and ’80s.

Jimmy’s brother, Paddy, also had a spell as racing manager and was for many years a track director. Paddy’s son, Jim, is current CEO at Dundalk Stadium.