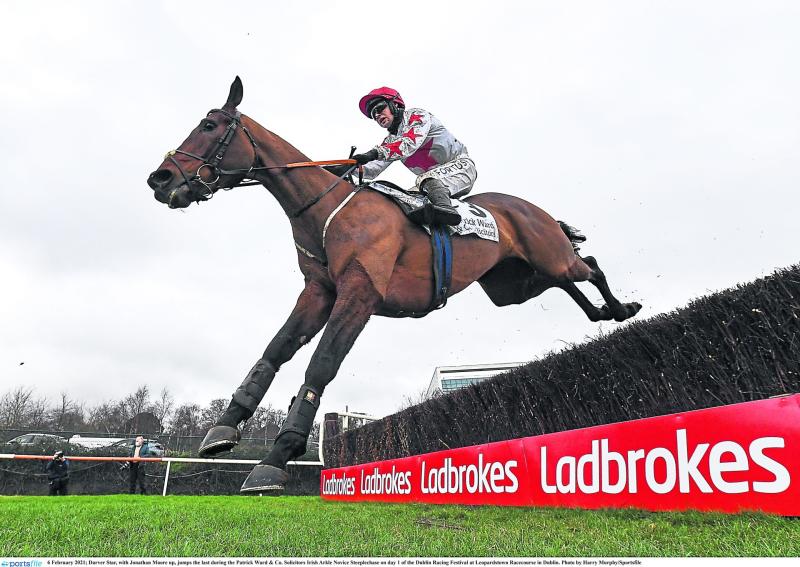 Darver Star, with Jonathan Moore up, jumps the last during the Patrick Ward & Co. Solicitors Irish Arkle Novice Steeplechase on day 1 of the Dublin Racing Festival at Leopardstown Racecourse in Dublin

County Meath trainer, Gavin Cromwell, is certainly doing his bit for owners from these parts. Over the past couple of weeks, he has sent out the winner of a big Galway hurdle for the best known of Louth-based syndicates.

However, it was a County Kildare handler, Michael Halford, who went tantalising close to landing one of the big handicaps at Leopardstown for Frank Lynch.

A licence-holder since 2005 after learning the ropes at stables in Australia and this country – the late Dessie Hughes one of those who gave him instructions at his Co Kildare yard – Cromwell trains out of Balrath in the Royal County.

He concentrates on both branches of the sport and has claimed a number of notable prizes for his owners, the Champion Hurdle at Cheltenham, the Welsh Grand National at Chepstow and one of the main supporting events at the big Prix de l’Arc de Triomphe meeting in Paris among them.

Records show he has accounted for 216 winners in the last five seasons, an impressive tally by any standards.
Darver Star is in Cromwell’s stable strength, and probably not since the late hotelier Matt Donnelly’s Farney Fox, any one of many from Bunny Cox’s former Lisnawilly stables, or, more recently, Judge Frank Roe’s Carlingford Castle, has there been a more popular local racehorse.

Darver Star doesn’t really need an introduction. Since first donning the red-and-white colours of the trio in whose name he races – the mid-Louth based Pat Cluskey, Simon Fagan and Sean Fanning – he’s had his name written on hundreds of bookies’ dockets, many of which were worth holding on to.

There would have been a real killing had he stayed on that wee bit better in the 2020 Cheltenham Champions Hurdle.
That March day, as Covid-19 began to bare its teeth, Darver went from being handily placed to taking over the lead approaching the last; but while he landed in front, he found the climb to the winning post that too much for him, and faded to finish an honourable third.

The handsome bay gelding was troubled with injury after that, and it was feared at one stage his racing career could be over. But expertly handled by the patient Cromwell and his team, he was returned to his best and a few weeks ago confirmed his well-being with a win at Kilbeggan.

Darver Star faced stronger opposition at Galway a fortnight ago, but this time was even more impressive, winning the hugely competitive Deacy Gilligan Hurdle by just over eight lengths. The odds were good, 15/2.

While his last attempt at the bigger obstacles didn’t work out so well, the ten-year-old, bred by Pat Cluskey, could be turned to ‘chasing again, though for the time being is likely to stay hurdling.

It’s in the other code in which Golden Twilight is trading his wares, and Frank Lynch’s Leopardstown runner almost brought off the biggest win of his career.

Running in the €88,000 to-the-winner Petingo Handicap – the last race on the opening day of the prestigious Champions Weekend – the Ronan Whelan-ridden gelding, who won at Dundalk on his previous outing, hit the front inside the final furlong, and although passed by the fast-finishing Moracana, fought back tenaciously, forcing the Judge to call for a photo.

It was what they call a head-bobber, the decision likely to go to the one to have his head down at the line. They couldn’t be separated by the naked eye, but the photo showed there was just the minimum between them, Moracano getting the verdict by the shortest of short-heads.

Consolation came owner Lynch’s way with the runners-up prize a handsome €23,000. Golden Twilight could be seen out at Dundalk over the winter. The first meeting of the new season took place last Friday, and there’ll be racing each week over the autumn and winter months up until early April.