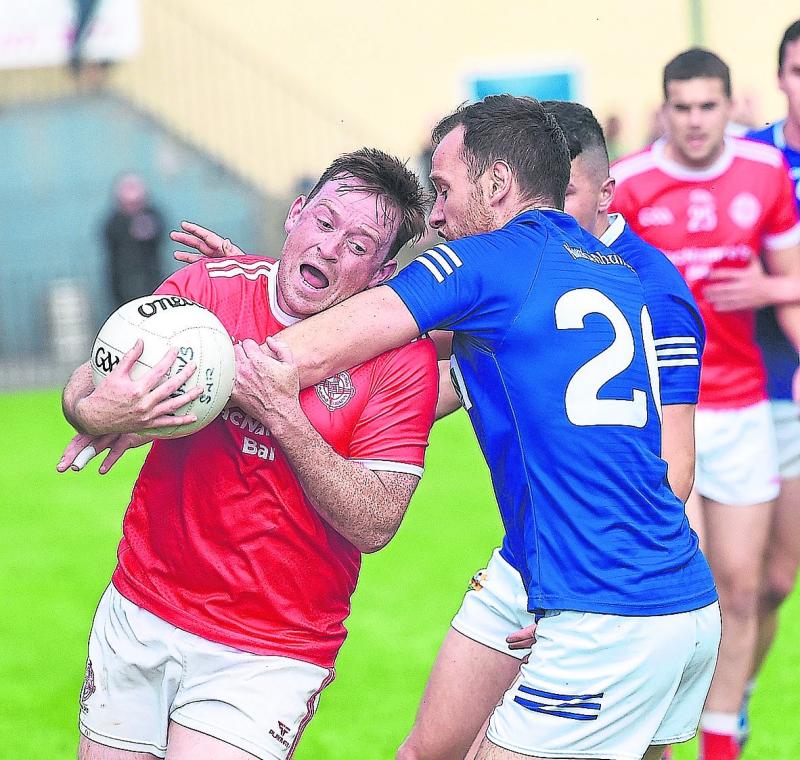 The old adage of goals wins games came through again, yet in reality Ardee were made work much harder than expected against a much-improved St Brides outfit who were far sharper than in their group encounters.

Cathal Murray’s troops were in trouble early on, but two goals in quick succession from Tom Jackson and Carl Gillespie turned a two-point deficit into a four-point lead.

That, coupled with another green flag from Daire McConnon late in the half helped create a five-point gap at the break, one which despite significant pressure from the Knockbridge men would never be bridged.

The men in red knew they had to have a fast start to have any hopes of causing a shock and to their credit came out of the blocks strong. They dictated the pace, smothering St Marys and tried to stay on the ball for as long as possible.

Sean Marry and Michael Keane were the Brides’ playmakers, winning turnover after turnover in the first half before launching in some nice aerial efforts into an always moving full forward line. Emmet Kirk developed a great trait of getting away from marker, drawing fouls or fielding nicely for marks.

Two efforts from Kirk coupled with a nice free from Kieran McCardle resulted in their side taking an early three-point lead, with the men in blue struggling to create much return fire.

They finally broke their scoring duck via a free from Jonathon Commins, but it was on the next phase of play that a mistake opened their door for their comeback. From the kickout Darren Breen picked out an awaiting Daire McConnon who duly teed up Tom Jackson for a goal from close range.

Another point in quick succession followed before the Marys grabbed a second goal in 90 seconds. This time it was Jackson who turned provider with a long effort into the corner which was won by Carl Gillespie. He duly glided along the endline before unleashing a bullet past Breen.

Their tactics were becoming clear, it was all about running at the Brides as much as possible; Commins, Evan Malone and Shane Mathews the men tasked with creating opportunities for McConnon and Jackson. The problem was they time and time again ran into a wall of defenders.

The Brides had plenty of the ball, even after the two goal sucker punch. The problem was old habits die and hard and just as in their group encounters, they were wasteful on the ball. They ended the tie with 10 wides, five in each half.

But their urgency was rewarded with four more scores from Marry, Patrick Reilly and two great marks from Emmet Kirk who continued to create space with ease.

Last year’s semi-finalists were rarely seen at their free-flowing best, yet when required were able to eke big scores to remain in front.

Their solo running gameplan finally bared fruit on 31 minutes, McConnon darting through the heart of the St Brides defence and bagging a crucial third goal that left his team 3-3 to 0-7 in front at half time.

The Knockbridge men started brightly once more, again maintaining possession and keeping their opponents off the ball, having upped the speed of their game.

This hard work saw them go within a point of St Marys when grabbing a goal on 39 minutes. Kirk did well to create another turnover before laying the ball off to Marry. His solo run saw him get in space and he made no mistakes in blasting it past James McGillick. It was now 1-8 to 3-3. Game on.

Or maybe not, as from here Bellew’s troops found another gear, outscoring their opponents 0-5 to 0-2 from this point until the final whistle.

Shane Mathews led by example with three from play, meanwhile the Brides recorded another five wides. They will wonder what might have been had they been more clinical, but you have to assume if it was required Ardee would have found another level.