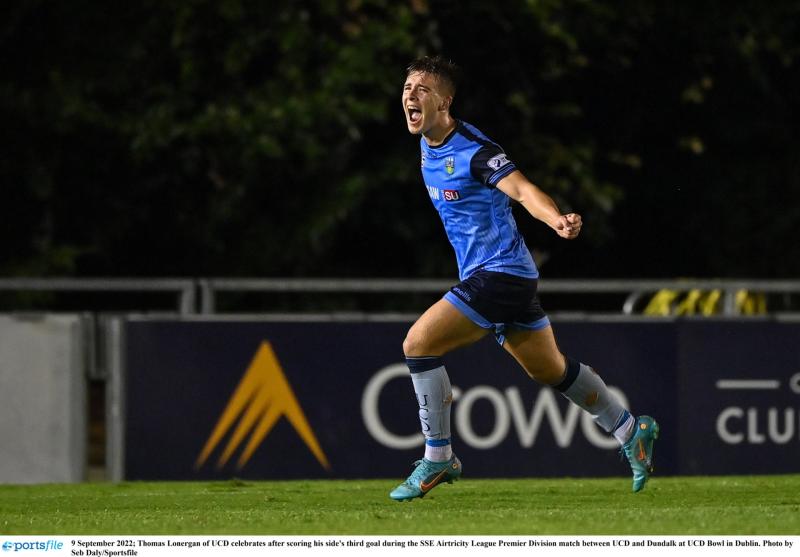 Niall Newberry at the Belfield Bowl

In doing so, they missed a chance to go level at the top of the SSE Airtricity League, and are instead anxiously looking over their shoulder in the race for European qualification.

Keith Ward and Steven Bradley had both put Dundalk ahead at different stages of the match, but were pegged back on both occasions by Thomas Lonergan and Dylan Duffy.

Incredibly, Lonergan won it for UCD late on to give them just a fourth win of the season.

Dundalk were asking questions as early as the fifth minute, when David McMillan was slipped in on the right before forcing UCD goalkeeper Kian Moore into a decent save.

Ardee Road native Ryan O’Kane has been something of a revelation for Dundalk of late, and the 19-year-old’s cross was headed over the crossbar by the unmarked Greg Sloggett.

The Lilywhites almost went ahead on 25 minutes when O’Kane’s corner was directed goalwards from close range by captain Andy Boyle, but only into the hands of Moore.

Stephen O’Donnell’s side were beginning to turn the screw in Belfield, and Darragh Leahy whipped in a delightful cross which was turned over by McMillan’s diving header.

They took the lead five minutes before the half-time break, when ex-UCD player Ward curled a free-kick from outside the box which found the netting via the aid of the post.

However, Dundalk were rocked on 51 minutes as UCD equalised through forward Lonergan, who finished brilliantly after weaving his way into the box unchallenged.

UCD were only level for eight minutes, however, as Dundalk hit the front again, with O’Kane wreaking havoc once more before it broke for Sloggett, and he laid it off for Bradley, who had all the time in the world to pick his spot to finish and make it 2-1.

The Students never gave up, though, and they had a chance to level again, when Sean Brennan created space before his shot was pushed around the post by Nathan Shepperd.

Indeed, UCD made it 2-2 on 80 minutes, with a quick break down the pitch concluding with Duffy rifling it into the bottom left-hand corner, giving Shepperd very little chance.

Amazingly, UCD won it three minutes from time when Lonergan was slipped in, and he rounded the helpless Shepperd before firing into the roof of the netting to make it 3-2.