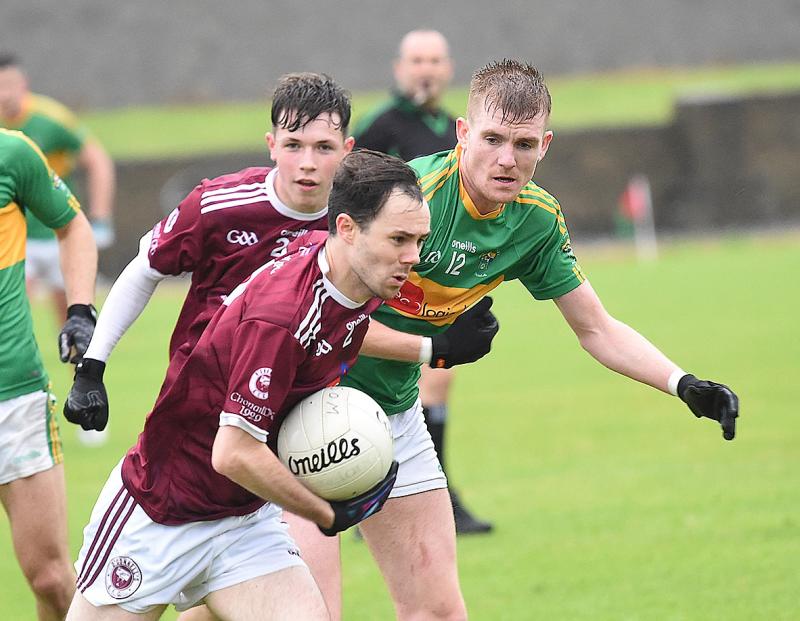 Emmet Byrne breaking up a Sean O Mahony's attack as he gets past Kyle Carroll. (Pic: Arthur Kinahan)

Dogged Sean O’Mahony’s got their annual intermediate quarter final ticket stamped with a win over O’Connell’s at a soggy Dowdallshill. The fact of the matter was the conditions made the contest a slogfest and with that the more skilful team on the day won.

There is a GAA theory out there that would say the bigger, more physical team tends to win on the wet day but O’Mahony’s, through better handling and decision making throughout their team, debunked that theory tenfold. They also had the silky Terry Kelly on their side too.

Cornerman Kelly was his usual slippery self but the rain aided that elusive nature of his. Going through numerous markers the Quaysider kicked five points from play on that sweet left foot of his. Each score a beacon of light on a damp day.

What makes the performance from Kelly even more significant was that he had to lead the side himself. With Stephen Kilcoyne out, it was down to Kelly and he more than stood up to the task.

The Castlebellingham outfit had their moments, but they’ll play in the relegation play off for the second season in a row. Jackie Agnew, with headband in tow, was his combative self but the final ball and execution at the other end was not up to scratch.

As a result they could not match the level of performance they showed the week previous in putting doubts into the minds of group 3 table toppers Roche Emmets.

Liam Dullaghan's team simply had better ball handlers in the middle sector of the field. Newbie Gareth Hall and Shane Brennan got through a mountain of heavy lifting but the deep setting half forward trio of Thomas Rice, Conor Finegan and Kyle Carroll limited Paul McKeever’s sides options and to one score from play over the hour.

In the attack the space was then there for Kelly to exploit and he duly did with some crisp scores, cutting in and spinning over from the right on his left foot.

O’Mahony’s led 0-5 to 0-1 at half time and with Rob Galligan putting the clampers on Niall Conlon in the second half, there would be no dramatic comeback.

Centre back Kian McEvoy marshalled his defence very well and the rejuvenated Keith McLaughlin linked the play and their passage to the knockout stages as the game petered out.