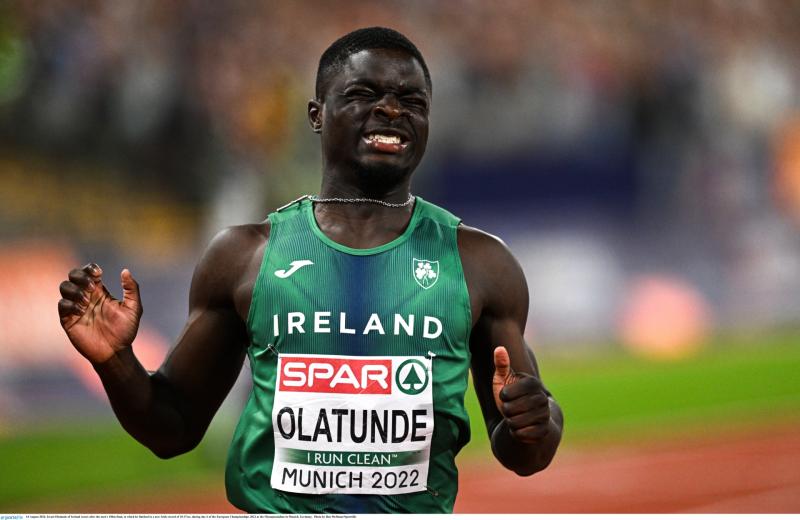 Dundalk's Israel Olatunde reacts after the men's 100m final at the European Championships, in which he finished in a new Irish record time of 10.17 seconds

What a magnificent time it’s been on the international scene for sportspeople from these parts.

Boxer Amy Broadhurst takes another gold, paracyclists Eve McCrystal and Katie George Dunlevy prove supreme once again, and while Israel Olatunde didn’t stand on the victory podium, his achievement at the European Championships wins him a special place in the world of athletics.

As is always the case when I watch a championship sprint race on television, I think of a former Democrat work colleague of mine. It was like that as Dundalk-born Israel became the fastest-ever Irishman, competing in the Munich stadium where the 1972 Olympics were held.

When the late Gerry McShane’s career was at its height back in the 1950s and ‘60s there was no faster man in Ireland over the sprint distances. He won seven national titles, most of them over the 100 and 220, and also figured on winning relay teams.

But for the infamous split that sundered Irish athletics for so long, barring NACA members from competing, he’d have made the Irish Olympic team, and may well have collected a medal.

Among those who finished down the field behind him in the 1962 Irish Championships was Victor Manich, who, running for his native Poland, took bronze in the 100 metres at the Rome Olympics two years later.

Gerry wore the Dundealgan AC colours, and it’s there where 20-year-old Israel Olatunde took instructions before moving to the club attached to UCD, where he is now studying for a degree in computer science.

Speaking on radio after finishing sixth in the 100 metres, but much more important than that, clocking 10.17 to become the fastest ever Irishman over the distance, he paid tribute to his first coach, Gerry McArdle, a retired member of the Marist College teaching staff.

While a student at the Marist, Israel, whose parents are Nigerian, played football at underage before turning his full attention to athletics. In qualifying for the Euro final, he finished second to Olympic champion, Marcell Jacobs, and it was the Italian he was drawn alongside in the decider. This may have been a factor in him running faster than ever before.

As expected the Olympian took the title, but delighted as he was to have added another title to his haul, Marcell may not have derived as much satisfaction from the outing as the sixth-placed did from his record-breaking achievement.

And again I stepped into the time machine, travelling back to the aftermath of Ronnie Delany’s gold-medal run at the 1956 Melbourne Olympics. Then as now, the Irishman dropped to his knees in prayer soon after crossing the line.

While a sub-10 second run would appear to be well within the local lad’s compass, a place on the Ireland team for the Paris Olympics in two years’ time is probably his priority.

And if he makes it there, what are the odds that Amy Broadhurst will also be wearing a green blazer?  Very good, you would have to think in the light of the world lightweight champion adding to her laurels at the Commonwealth Games in Birmingham.

It’s all been happening for the Dundalk lass this year. She was part of the back-up team as Katie Taylor prepared for her historic world title bout with Amanda Serrano at New York’s Madison Square Garden. Then a few weeks later, she was taking the bell herself, competing in the World Championships in Turkey.

Scoring a decisive win there, Broadhurst was always likely to add the Commonwealth crown. Qualifying for these championships because of her link with the Rostrevor club in Co Down, she paced herself nicely on her way to the final.

But there was no holding back in her bout with England’s Gemma Richardson. She was on top from the first bell, leaving no doubt as to her superiority. All the judges voted in her favour.

There’s simply no stopping Eve McCrystal and Katie George Dunlevy. Winners of three Paralympics golds and two silvers, they brought their World titles to six by winning the tandem road race in Baie Comeau in Canada.

It wasn’t so much a win as a rout, one minute and 36 seconds separating them and runners-up, England’s Sophie Unwin and Jenny Hall.

She has spoken often about retirement, but it may be that this win will encourage Jenkinstown’s McCrystal to keep the partnership with her London-based ally intact, making Paris 2024 their aim.

And there’s the Worlds next year. If they’re in the line-up, they’ll wear the coveted yellow jersey as title-holders.