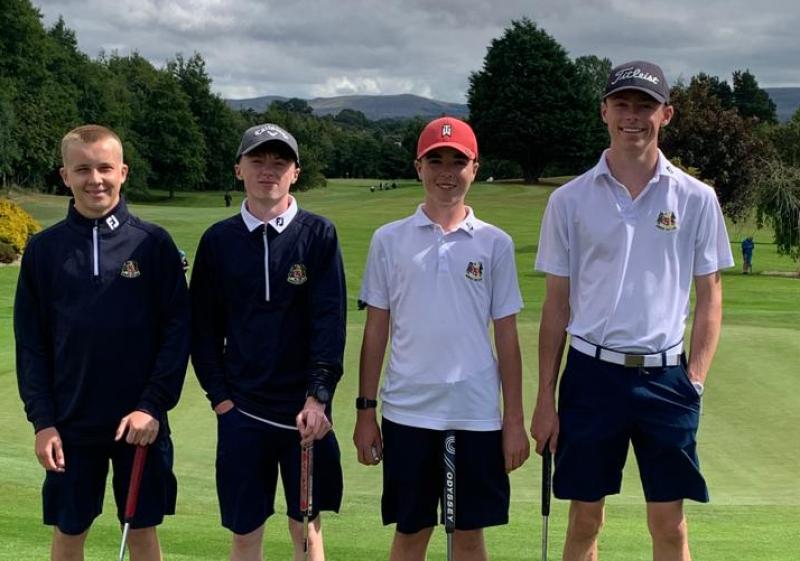 Commiserations to our Boys Foursomes team who were beaten in the All-Ireland quarter-finals at Ballina Golf Club by Castlebar.

Vincent Conlon’s team lost by the narrowest of margins with John Clarke and Odhran MacShane losing by one hole to Owen Kelly and Tommy Heneghan, while Conal Mullins and Fionn Cunningham lost by one hole to Aaron Quigley and Conor Stapleton.

Castlebar went on to reach the final where they lost by two holes to Royal Belfast. With most of the panel underage for next year, it is hoped that the experience gained during this campaign will stand to the team.

Eoin Murphy played a key role as Leinster won the Men’s Interprovincial Championship at Moyvalley Golf Club last week with the Dundalk man delivering 3.5 points out of a possible five.

In the opening match against Ulster, Murphy and Bray’s Alan Fahy lost by one hole to Ryan Griffin and Cian Harkin and Murphy then sat out the afternoon singles as Leinster lost 6-5.

He partnered Fahy in the morning foursomes against Connacht on Day Two and they had a 2&1 win over David Kitt and Harry Gillivan. Murphy was selected for the afternoon singles and repaid the faith in him with a 3&2 win over TJ Ford.

Leinster beat Connacht 6.5 to 4.5 and were still in with a shout of the title when they teed it up against Munster on the final day.

Murphy and Fahy were asked to lead out the morning foursomes and halved with Richard Knightly and Darren O’Sullivan and Leinster won the session 3.5 to 1.5.

They then won the singles session 4-1, with Murphy winning his match against John Cleary by one hole as Leinster ran out winners by 8.5 to 2.5 and claimed the title on a countback of matches won from Connacht.

Copas went out in 32 nett thanks to a birdie on the par three fifth and pars at the seventh and ninth. He came home in 33 nett with pars coming at the 10th, 11th and 14th.

Brennan took second place overall on countback leaving Flynn to claim Division 2 and O’Connor to take Division 3. Aaron Waite (13) won Division 1 while Aaron Grant (+3) won the gross prize with a one under par 71.

On Wednesday, Eamon Hoey (21) won the Deluxe Bathrooms Open Singles Stableford competition with an impressive 43pts that included seven pars as he shot 24pts on the front nine and 19pts on the back nine.

The club was awash with pink on Saturday, August 20 and Tuesday, August 23 for the annual ‘Play in Pink’ fundraiser. There was a very large entry as ladies competed in a three-lady scramble for this most worthy of charities.

Play in Pink Days help support the National Breast Cancer Research Institute, a national charity that funds a comprehensive research programme, which has improved the diagnosis, treatment options, and outcomes for those who develop the disease.

By funding this research, the NBCRI aims to positively impact future outcomes for breast cancer patients.

The overall winners, with a superb score of 61 nett, were Grainne Jevens, Lucy Greenan and Pauline Campbell. They were one shot clear of the runner up team of Kathriona Conneally Sloan, Maureen Sheridan and Maura Hackett. In third place on countback were Juliette Morrison, Denise Morrison and Rose Curtis.

A nine-hole men’s competition, won by Pat Davis, was held in the evening and there was a great atmosphere in the club for presentation of prizes.