Newtown Blues take the spoils in game of the championship 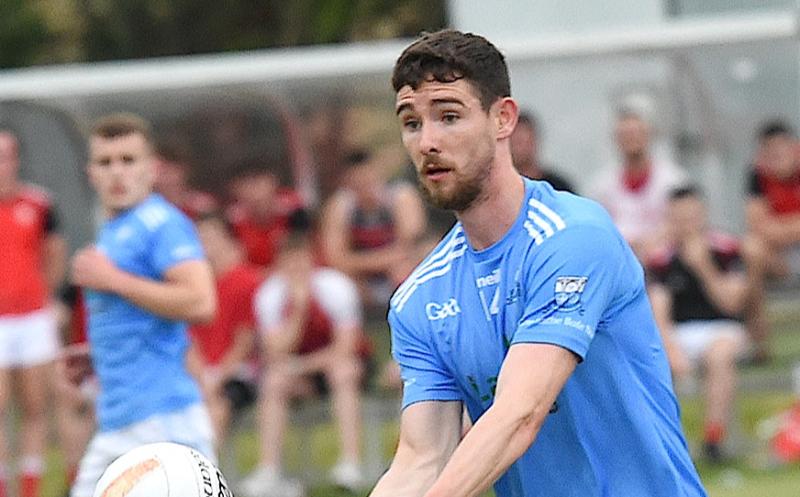 The Newtown Blues got their campaign off to a rousing start, turning a six point deficit into a four point victory in what was clearly the game of the championship so far.

Point scoring from all angles, two great goals, three red cards and a goalkeeping error that led to the pivotal third goal. This game had it all. Not to forget a missed penalty to boot.

That came the way of the Drogheda men early in the first half and despite going point for point with last year’s finalists for much of the first half, 1-3 without reply built up a nice cushion for St Mochtas at the break. The goal got via Ciaran Byrne.

However, the Blues looked a different team in the second half, piling on the pressure and turning the game on its head, Ciaran Downey and John Kermode their main weapons, Downey bagging two goals at crucial times as they showed their title credentials.

It was the Louth Village men that got the scoring underway, Declan Byrne bagging the first of his five scores on the night. Danny Kindlon regained possession from the next attack and teed up Ciaran Byrne who once more showed his incredible ability to grab a score from pretty much anywhere.

Both sides came to play open football and the Newfoundwell based club hit back with a brace of its own via Fergal Donohue and Andrew Kermode. Then came the aforementioned missed penalty on 11 minutes.

Daire Nally launched a ball in towards the square with the evergreen Andy McDonnell rose highest to win it. He was taken down by Ben Goss Kieran, leaving referee Ultan McElroy with no other option but to award a penalty. However, a tame effort from Emmet Carolan was saved by Jason Callan.

This tie was extremely open and entertaining to watch, five of the next six scores all coming from play as the sides went tit for tat. Efforts form the Byrnes brothers and Gerry Garland cancelled out by white flags raised by Ciaran Downey (2) and McDonnell.

St Mochtas took the game by the horns at this stage, notching 1-3 without reply. Declan Byrne, Gerry Garland and Darren McMahon all found the target, while the game’s first goal came just before half time.

Some great play from Conor Garland found Ciaran Byrne in space and he took no prisoners as he blasted it home past Johnny McDonnell. It left them 1-8 to 0-5 in front at half time.

Des Lane’s side needed a quick reaction to reignite their challenge for the Joe Ward Cup and to their credit they looked a different team after the break.

They put the Mochtas under much more pressure, which left them struggling to make the headway they had made earlier.

They had to work hard to keep possession from pretty much every kick out and ultimately the extra aggression in the tackle saw them turned over. The route to the Byrne bros had essentially been cut off.

The Blues hit 1-5 in the next 11 minutes, with Downey and John Kermode destroying the Louth Village defence. The first of Downey’s brace of goals came on 41 minutes, Emmet Carolan teeing it up for the county star to slot home.

After trading a point apiece, the game got a little overheated on the stand side touchline. A melee ensued that quickly encompassed many players from both sides. In the end it was Declan McNamara and the Mochtas keeper Jason Callan who were singled out and given straight red cards. McDonnell was issued a yellow.

Oisin Callen was sacrificed to allow sub keeper Liam Kindlon to enter the fray. Within two minutes of his arrival he had caused a Blues score, Kermode taking advantage of a poor pass to turn the ball over deep into Mochtas territory. With the goals at his mercy he fired it over the crossbar.

Not surprisingly, Newtown upped the pressure on Kindlon, this time it was Conor Moore who forced the error. He then fisted it over the keeper's head and into the delightful hands of Downey who rattled the net with ease, putting his side five clear with seven left on the clock.

Kieran Quinn’s side never backed down, but despite the dismissal of McDonnell for a second yellow, all they could do could was match their opponents score for score to the finish, Downey grabbing the insurance score in injury time. The Blues will now look to top the group with a final round victory over St Patrick’s.