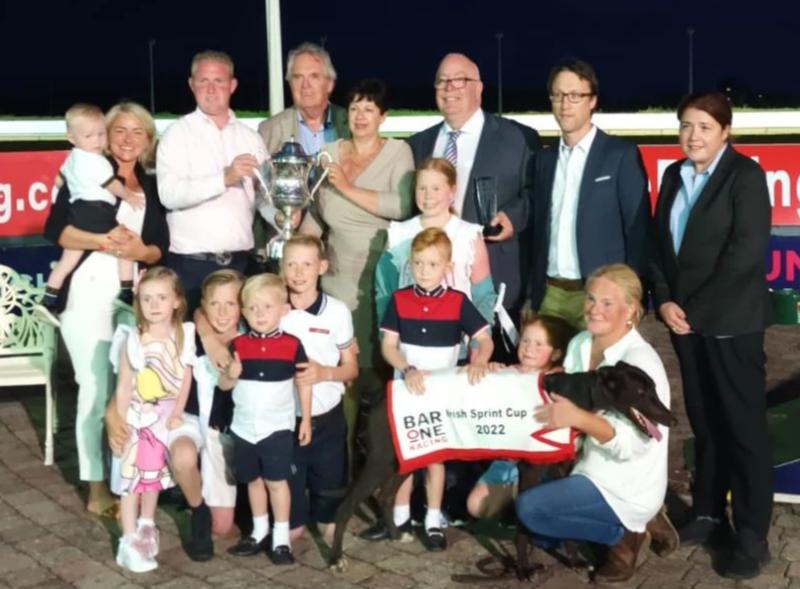 Dundalk Stadium housed another great day’s sport on Monday August 15th, a date resonant with many in these parts.

Horse racing in the afternoon, along with loads of entertainment for children, had greyhound racing as a follow up. The public’s positive response must have pleased management.

The weather could have been kinder in the afternoon. Rain for a while caused a scamper for cover, but before long it was back outdoors for the racing and train rides, depending on your age.

The crowd for the greyhound racing part of the day was unquestionably swollen by a huge Ardee contingent. Their presence was explained by Runninta Shay taking his place in the final of the €20,000-to-the-winner Bar One Irish Sprint Cup. The well-bred black is owned by a local syndicate, headed up by bookmaker Mickey Rooney.

Following for the Co Cork-trained runner had gathered momentum during the five-round Classic, and after he had taken second spot in the semi-finals, he was never likely to lack for vocal backing when it came to the decider. Red rosettes, denoting the trap 1 from which Runninta Shay was due to run, had some supporters proud to wear their colours.

Sadly, Runninta’s draw was to be his undoing. Trap 1 had provided just one winner in the competition’s previous 21 heats, with 3 and 4 being the most successful. This stat would have a big bearing on the result.

While Runninta Shay was left flat-footed, the dog in 3, Hawkfield Ozart, got a flier, shading it from the evens favourite, Serene Ace, and Westside Frank. The expectation was that Serene Ace would pick up 6/1 chance Hawkfield on the run to the bend.

It didn’t happen. Hawkfield, running for the McGee kennel that sent out the 2009 winner of the competition, Inny Blue, got to the bend in front, and though challenged by Serene Ace and the other semi-final winner, Flashing Willow, stayed on stoutly up the home straight to win comfortably.

Runninta Shay, well backed before going off the 7/2 joint second-favourite, took fourth, while a first bend coming together ruined the chances of rank outsiders, Westside Frank and Manuone.

While disappointed with the result, Runninta Shay’s syndicate members were looking to the future. The dog was the least experienced in the field with just 10 races, and having won over the 525 is likely to be campaigned over longer distances.

There was better luck for local interests earlier in the day. Frank Lynch had Golden Twilight running for him in the feature race at the horse meeting, and what a triumph the 5-year-old pulled off.

On offer at 20/1 on the night before the meeting, Golden Twilight was backed into less than half those odds, going off at 15/2, and anyone who supported the bay gelding knew from a long way out that their money was safe.

Given a confident ride by the up-and-coming Dylan McMonagle, Twilight – carrying red-and-white colours, as his owner did in his football days – came home along the near rails to score by almost three lengths, and in the process added €29,500 to his earnings. The Michael Halford-trainer horse has now won four races, three of them at Dowdallshill.