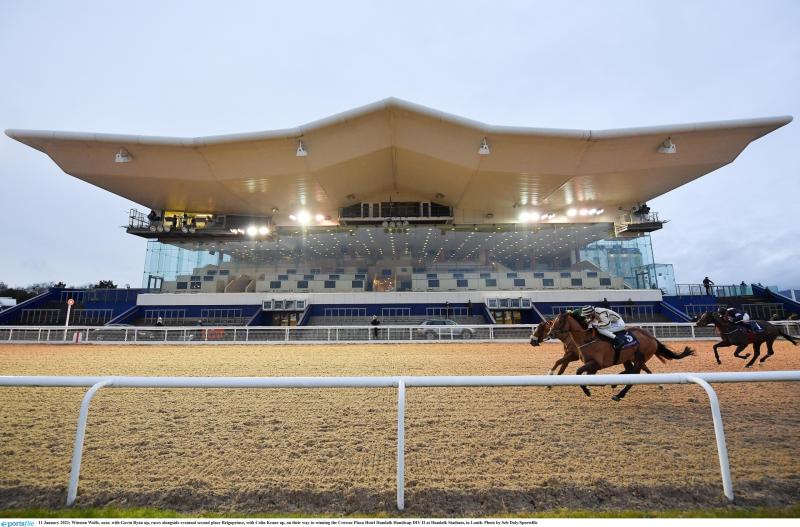 The Grandstand at Dundalk Stadium during a behind closed doors fixture in 2020. The track could lose some meetings in the future should proposals for a second all weather course in Tipperary go ahead

Dundalk Stadium management will be taking more than a passing interest in Monday’s meeting of the Tipperary County Council. Down for consideration is an application from Tipperary Racecourse to build an all-weather track on the periphery of the current grass track.

If the application is successful, it will give the country a second all-weather course. This may, or may not, impinge on Dundalk’s fixture list.

Since it was opened in 2007, Dundalk has seen its fixture-list grow by the year. This year is set to have 37 meetings, and it’s known that a further six will feature on the 2023 programme.

It has been patronised over the years by all of the country’s top trainers, and some from cross-channel, Mark Johnson and Sir Mark Prescott among them; stages Group 3 races, and most important of all, is noted for its safety.

Such is its popularity with trainers from all over the country, most of its races are over-subscribed and rarely listed without reserves.  Many runners who’ve been successful there have gone on to greater things, Breeders’ Cup success among some of its winners’ further achievements.

Dundalk’s bid to become the country’s first all-weather track centred on a long and arduous campaign. Other venues were preferred by the authorities, but none were keen to get involved, and in the end Dundalk was given the nod, the opening meeting taking place on Sunday, August 26, 2007.

The stadium, which also stages greyhound racing – its first meeting took place in 2003 – stands as one of the country’s finest.

While the Tipperary track is owned by Horse Racing Ireland, racing’s governing body – and therefore its application won’t want for clout – it is not certain to get the go-ahead, at least not until modifications on plans are carried out.

Councillors at Monday’s meeting will have before them a submission from Transport Infrastructure Ireland (TII), raising concerns about the development.

A recent newspaper report says that the TII feels the application “is at variance with official policy in relation to control of development on or affecting national roads”.

The course, as plans show, is run alongside the N24, which is the main road between Waterford and Limerick, and the TII has asked that “a Road Safety Audit be carried out by an independent qualified engineer”. Let’s wait and see.