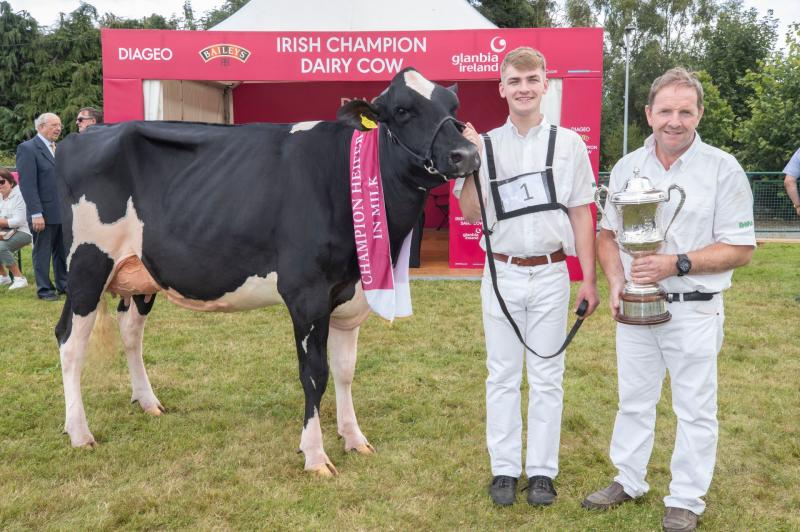 Father and son, Paul and Matthew Flanagan from Co. Louth have won the 2022 Diageo Baileys Champion Heifer in Milk title at the Virginia Show with their cow Tubbertoby Unix Minutemaid. The 10,000 Euro prize fund was contested by fellow Holstein Friesian breeders from all over the island of Ireland. The competition is sponsored by Diageo Ireland and its cream supplier Glanbia Ireland to reward dairy breeding excellence. Twenty one cows were in the finale. Tom Kelly also from Co. Louth won the Best E.B.I award with his cow Monamore Armours Darlene EX91. E.B.I (Economic Breeding Index) is recognised as a measure that helps breed a more profitable dairy cow and lower GHG emissions.

The event is regarded as the most prestigious competition of its kind on the island of Ireland. It rewards strength and good body conformation as well as proven excellence in quality milk production. A Co. Down junior cow, Hiltara Undenied Apple, entered by Sam and John McCormick won the overall 2022 Diageo Baileys Champion title.

Congratulating the winners, Robert Murphy, Head of Baileys Operations said, “From being the world’s first cream liqueur to becoming the world’s most loved spirit, Baileys is now a global giant of a brand. We are proud of the brand’s heritage and its connection back to family-owned farms on the island of Ireland. This event highlights that link between superior genetics that go into the national dairy herd and the dairy farmer-suppliers of its primary raw ingredient."

“Glanbia Ireland is delighted to be back at the Virginia Show. It was fantastic to see so many of the country’s foremost dairy breeders return after a two year hiatus. They put on a first class display for the crowds here today. Congratulations to all our winners.”