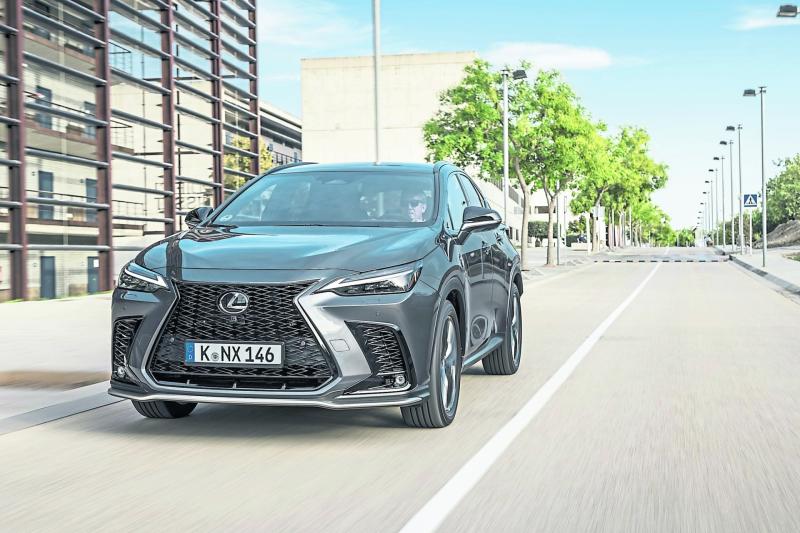 This second generation NX is Lexus's offering against the likes of the Mercedes GLC, BMW X3, Audi Q5 and Volvo XC60. All wonderful cars and highly in the SUV sector. Buyers are discerning and demanding. Can the NX land a chunk of these customers?

The huge, instantly recognisable, front grill that has all the dimensions of a basking shark’s mouth, seems to look quite normal now and will probably be how we feel about the current crop of BMWs grilles in a few years. The rest of the shape is typical SUV and to my eye it is more interesting and cohesive than the competitors.

In a beauty competition between them I'd say the judges would give the NX the nod. It's angular as opposed to the likes of the GLC's curves and the creased triangle on the side below the C-pillar window looks like it was lifted from the Peugeot 2008 / Yaris a good design to cog. It has a purposeful stance and signals classiness.

The rear has an across the back light bar, of course it has, and Lexus identifying L shaped rear lights.

PHEV stands for Plug-in Hybrid Electric Vehicle. When we hear the word hybrid we immediately think of Toyota and Lexus by extension as they own Lexus. The first mass produced hybrid was the Prius back in 1997. They were charged up by the petrol engine, but the PHEV lets you charge the battery from the mains for a much longer range.

What shocked me was learning that the NX is the first PHEV from Lexus. When the direction of travel is to all-electric it's kind of a strange move especially as Lexus have stated that they will offer all models as a BEV by 2030 and all their cars sold will be BEV's by 2035. Very ambitious and a clear signal of what we will all be driving soon.

The PHEV I always felt has a place before going all-electric in that the commute, max. 74km distance allowing here, can be done by the battery. If you must go further the 2.5litre petrol engine producing xx bhp kicks in and you don’t have to worry about charging to get all the way there or back.

My total average economy was 5.6l/100kms and covered 52kms using just the stored energy in the 18.1kWh battery but in fairness this was not all undertaken on low-speed urban roads so expect closer to the 74kms projected by Lexus if that’s your commute. Lexus claim 1.1l/100kms but that must be for the first 100kms because after the battery depletes you are on petrol only.

The NX is the first Lexus to showcase their new e-Latch. It’s very cool.
Instead of pulling a lever towards you and push the door away from you, which is counterintuitive to what you are actually trying to do, with the new e-Latch you press a handle, the car releases the electronic latch and the door opens away from you.

Very cleverly, it won’t open the door if the blind spot detection system detects a car coming from behind which is a logical extension safety use of this nifty feature. It also makes doing the Dutch Reach door opening technique a lot easier - google it and adopt it.

I'm a huge convert to cooled seats and love them, they just make you very comfortable on hot days when combined with the need for cool, air conditioning. The interior of the NX is beautiful and what you'd expect from a premium car.
The seats look and feel like you are getting seats from a much pricier car. The electronic touch controls are effortless to use and well thought out.

You really get the sense that it is a very well thought out cabin. Passenger space and comfort in the back is a revelation. I’d nearly opt to be in there for some trips and make the most of the reclining seats. The boot, which is accessed via a powered tailgate, has a 520-litre capacity expandable up to 1,411 litres.

Being a Lexus, you expect a nothing less than an exquisite ride and the NX doesn’t disappoint. It is the epitome of composure, providing tons of comfort. It handles beautifully and is quite a pleasure to take around the back roads. Quietness is a Lexus trademark and I've no complaints about the levels provided in the NX.

Being an SUV, it has the kit to back that up with E-Four fitted as standard that helps when driving over slippery ground through an electric motor integrated into the rear differential.

The NX has a bit of an unexpected trick up its sleeve.

It is very competitively priced compared to its competitors when you check what you get for what you pay, for and you don’t feel short changed.

The GLC for instance starts at €79k and no PHEV bonus. The NX is one of the best mid-size SUV’s around, has proper luxury credentials, AWD ability, is very fetching to look at and keenly prices. Need any more reasons to consider the NX? You shouldn’t.

Next week we have the newest car brand to come to Ireland; Polestar.