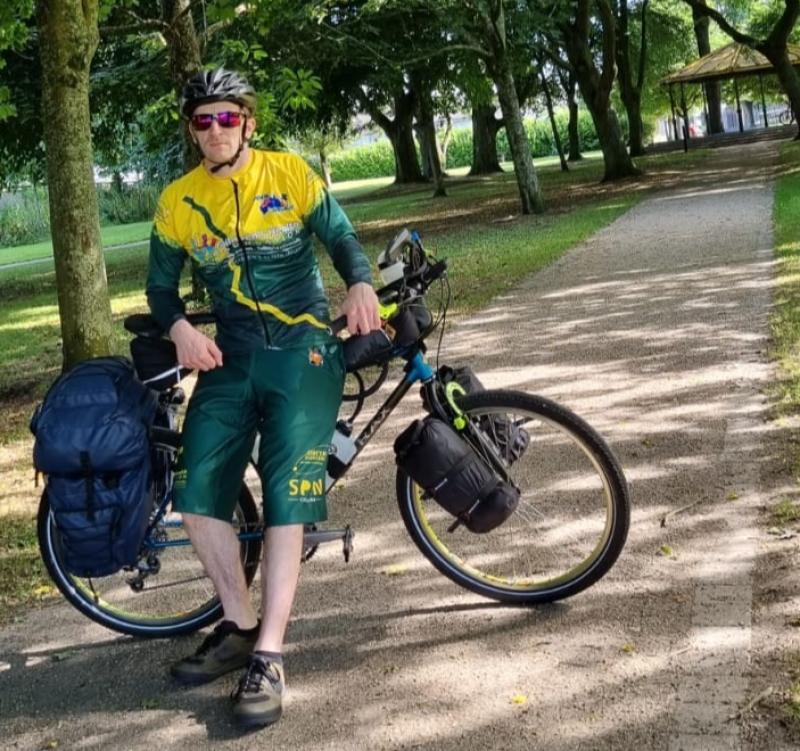 A Dundalk man's life goal of cycling from the top to the bottom of Australia is set to begin this month, with a 3,030 Km cycle from Darwin in north Australia to Adelaide in the south. John Mulligan, from Happy Valley in Dundalk, is undertaking the mammoth task, while also using the opportunity to raise money for the Children’s Health Foundation in Crumlin.

Speaking to the Dundalk Democrat, John says “I'm doing it for me but I'm doing it to raise money for charity while I'm at it”.
The journey, of around 3,030 km, according to Google maps, will take him a month to complete, he aims. “So probably six days on, take a day off, a couple of days off in Alice Springs, and then carry along on my way.”

John is well used to long journey's on the open road. “I did the length of Ireland years ago, 660km over five days.” He adds that that he does a a lot of mountain bike racing and enduro racing, “so long days in the saddle I'm used to. This is a more relaxed atmosphere, there's no race, its just me. I can go at my own pace, if I need a day off I can take it, there's no restrictions, I have enough time to do it, I'm not under time constraint.”

The potential loneliness on such a long cycle doesn't seem to faze him at all. “Ach, I like the open road, I like going off with the earphones in and just listen to music and podcasts and just let my mind wander.”

He has prepared himself well for the long journey ahead, recognising any potential challenges that may arise. “It could be a bit boring here and there but I've read a lot of people's blogs who have done it, and they don't really get bored. It's going to be hot at the top and will get cooler as I get back down [to Adelaide]. The heat probably, for the first week, getting used to it. It is winter time over there but its 30-33 degrees. I have cycled in that weather before, its not a big deal.

"I'll do it early morning and finish early, that's the plan. Start at six in the morning and finish by lunchtime. I'll be staying in road houses but I will have to camp here and there. There are tent pitching places and I'll stay in the odd room here and there if its available, so I'm not too bothered with that. I have budgeted for that, so I can get a nice sleep every so often.”

The achievement of a life goal will certainly push John on. “It's a challenge for myself that I've wanted to do”, he says. “Since I did the length of Ireland I've kind of been planning this and I can afford to do it now. I wanted to do it over the past couple of years but with Covid I couldn't travel. So as soon as the borders opened up I applied for my visa and booked my flights.”

He says he is very thankful of the support of his boss at his job at Orbital Engineering in Dublin. “I'll not stand in the way of a life goal”, he told John. Orbital Engineering are also sponsoring John for his cycle, as are Spun Cycles in Navan , who have sponsored him with gear for the trip. The logos of both appear on the cycle gear he will be wearing on the cycle.

The long journey from Happy Valley to Oz begins for John this Wednesday when he flies to Melbourne. From Melbourne he takes a flight to Darwin, with the cycle beginning on Friday 19 August. John has a Just Giving fundraising page set up where people can make a donation, which will go to Children’s Health Foundation Crumlin. The web address to make a donation is www.justgiving.com/fundraising/john-mul.

John doesn't have a particular target fundraising amount in mind. “I'd like to get kind of something matching the distance”, he says. “I haven't really publicised it yet that much because I was waiting until the week before.” Keeping in mind the issues with travel in recent times he said, “I want to make sure I was there, with the way things are going. Travel plans could change last minute.”

Getting there in the first place, does seem to be a bigger challenge to John than the actual cycle. “The people who know me know I'll do it. Everything I've set out to do cycling wise, I've always completed it. I'm confident that I'll do it. It's a matter of getting the miles in. Once I get the first week done, I'll be in the swing of things. I'm prepared for the worst but hoping for the best.” Listening to the determination in his voice, it's easy to imagine that he will.