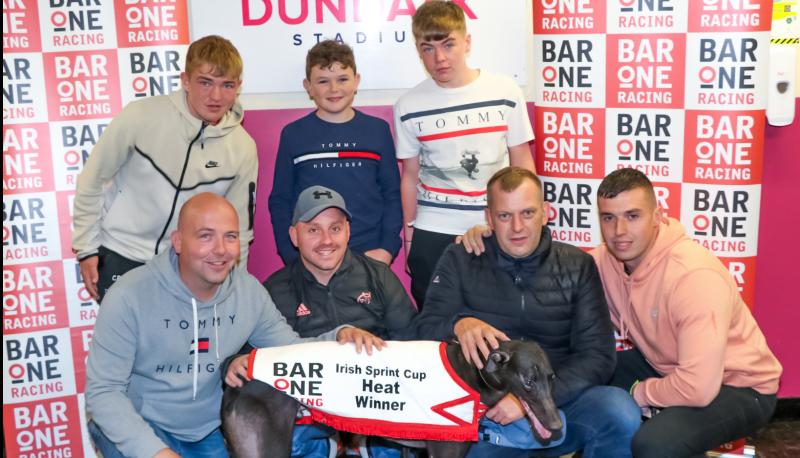 A question for Mickey Rooney, bookmaker, greyhound-owner, chairman of Ardee St Mary’s GFC: If you had to choose between Runninta Shay winning next Monday night’s final of the Bar One Racing Irish Sprint Cup, and Mary’s being crowned Louth senior champions in a few months’ time, which would it be?

No, you can’t have both, even if you say please - one or the other.

There’s something else on Mickey’s CV. He’s head of the syndicate which owns Runninta Shay. Other members are from in and around Ardee, or over in Co Meath.

It’s for sure all of them, along with other family members, will be at Dundalk Stadium on next Monday night to see if their runner can land the €20,000 that goes to the winner of the country’s most prestigious sprint competition.

Many of them were there last Saturday night as their Co Cork-trained black tried for one of the three qualifying spots available in a very competitive semi-final.

Runninta was among the outsiders, unfavourably drawn in trap one; but he made light of the handicap to get to the corner in second place behind the fancied Flashing Willow.

And when he turned for home clear of the rest, almost guaranteed a place in the decider, the cheers went up from his enthusiastic supporters. Probably never before has a runner-up been given such a raucous reception.

The race was won in an exceptionally fast time, but there was even better to come in the other semi-final. Serene Ace had been brilliant in the competition so far, and after three heat wins, the Co Tipperary-owned runner was again odds-on to score.

He didn’t let his supporters down. Fast away from trap two, he went whoosh to the corner, and after turning on his own, made it to the line with lots to spare in the competition’s fastest time to date.

All of this points to a mammoth task facing the Ardee runner in the final. Serene Ace is four from four in the competition, has recorded the fastest time in each of the rounds, and hails from a Derby-winning kennel. In his 32-race career the son of Scolari Me Daddy has only been out of the first three once, and has won 17 times.

Flashing Willow, Runninta Shay’s conqueror last Saturday and the likely second-favourite, is another prolific scorer with 13 wins from 19 outings, and also has a Derby-winning handler.

But will this deter the Ardee cheerleaders? Certainly not. Runninta may be among the outsiders, again running from the inside, but it’s odds-on he’ll have more supporters than any of the other finalists and they’ll be heard.

And it won’t be a surprise if there’s a blue-and-white flag or two being waved. For those who don’t know, these are the St Mary’s colours. More about the Ardee club after a comment on another of the Sprint Cup finalists.

Westside Frank runs for Martin Lanney and will be the Co Meath-based owner/trainer’s eighth Sprint Cup finalist. Lanney won with Johnny Gatillo when the competition was in its infancy, and since then has been responsible for three runners-up, two of them beaten by a short-head.

Among this duo was Forest Natalee, pipped by Larry and Brian Jones’ Carrickmacross runner, Heisman, before going on to win the Sporting Press Irish Oaks.

Like the Runninta Syndicate, Mickey Rooney has winning form. They won the Irish Laurels in Cork three years ago with Runninta Seeya, while Rooney, along with his three bothers, Alan, Ken and

Gerry, helped St Mary’s win the Louth championship in 1995, the last time the Joe Ward Cup has made its way to Ardee.

Mary’s leave the traps in this year’s renewal of the county’s main competition the weekend after next, and the betting suggests it’s a two-horse race between them and the champions of the past two years, Naomh Mairtin.

These sides met in a behind-closed-doors final in 2020, with Mairtin’s prevailing for a first-ever success. But there’s more than a hint in current league form that this could be Mary’s year.

So come on Mickey, what’s it to be, Bill or Ben (if there’s only going to be one major) – on the victory podium next Monday night, or parading the Joe Ward through Ardee?