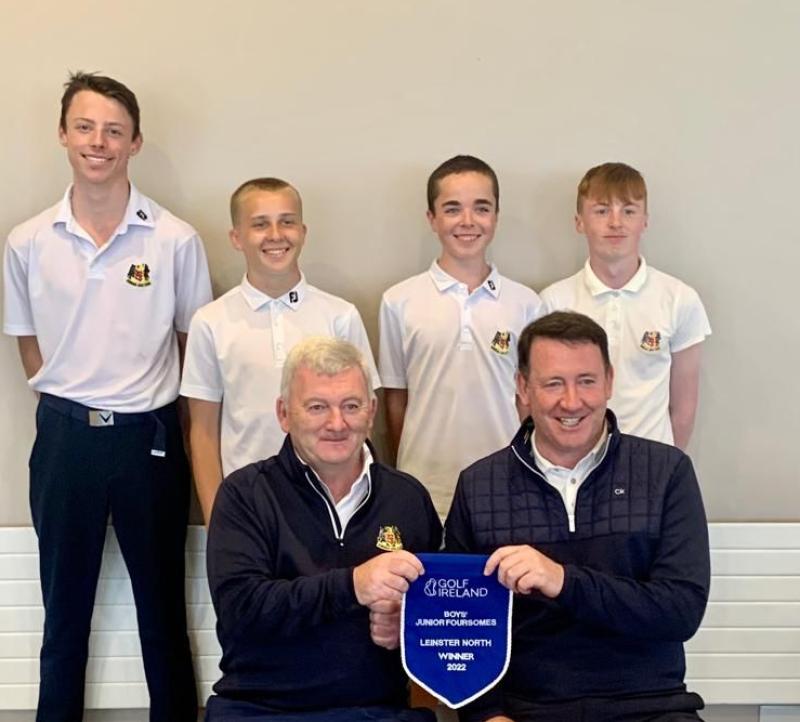 The Boys Junior Foursomes team were crowned Leinster North champions when they defeated hot-favourites Roganstown in the final at Howth Golf Club.

The pairings of John Clarke and Odhran MacShane and Conall Mullins and Fionn Cunningham had an impressive nine-hole victory in dreadful weather conditions.

On the way to the regional title, Dundalk had wins over Black Bush, Ardee and Laytown & Betystown. The other members of the panel were Eoin Purton and Lee Egan.

It’s been a couple of good weeks for Boys team manager Vincent Conlon, who was also manager of the Leinster team that won the U-18 Inter Provincial series at Hilton Templepatrick, winning all three matches.

Bobby McCarthy, playing off eight, shot an impressive 46pts to win the singles stableford competition which was played over the weekend of July 23 and 24.

McCarthy got off to the perfect start with a birdie at the first and then reeled off four successive pars before going birdie-par-birdie-par over the next four holes to turn on 25pts.

Successive bogeys at the start of the back nine threatened to derail his round but he recovered his composure and parred the next six holes before finishing with a birdie on the last for an inward nine of 21pts.

His tally of 46pts was three more than Joe Garvey (22) and Michael Gill (13) who both finished on 43pts with Garvey taking second on countback. Mark Cumiskey (11), Gerry Oakes (18) and Kevin Callan (28). McCarthy also took the gross prize with 38pts.

McDonnell had eight pars and one birdie as he delivered scores of 23pts and 24pts to finish three clear of Tony Hanna (27) who won Division 3. Frank Byrne (10) took Division 1 and Derek Williams Jnr (16) took Division 2 while Caolan Rafferty claimed the Gross Prize with a round of 46pts that included one eagle, five birdies and no dropped shots.

Captain Eoin Doohan held his prize to the ladies on Tuesday, July 25. There was a great turnout for the event and some super scores returned. The overall winner, Una Kelly, shot a superb 66 to win by one shot from Eve Rowland and Mairead Ahern.

Una, playing off 22, had a very steady and impressive round. She covered the front nine in 33 nett, which included pars at the fifth, eighth and ninth holes. Her back nine was equally impressive, with another 33 nett carded. This included a further three pars at the 13th, 16th and 17th holes.

Eve Rowland shot 67 to claim top honours in Division One, while Deirdre Smith was the gross winner with a one under par 71. Catherine Cafferty won Division 2 with a 69 and Mairead Ahern was the Division 3 winner with another 67. There was a large turnout for the presentation of beautiful prizes in the clubhouse that evening.

On the interclub front, the last remaining ladies team standing, the Carton Cup team, lost their semi- final match against Lucan. It was a great achievement to progress to this late stage. Very well done to all players and managers.