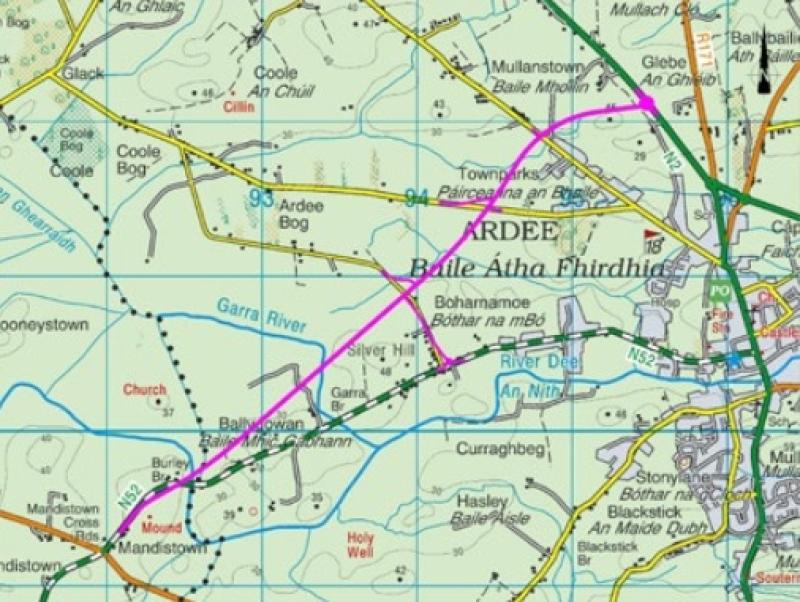 The planned N52 Ardee Bypass has been included by the Government as one of the country's priority infrastructure projects
over the coming years, but the programme for delivery of the scheme may be significantly impacted by the Judicial Review process should it proceed.

In a report released yesterday by the Department of Public Expenditure and Reform, Prospects 2022, high level information on 50 of the largest projects included in Project Ireland 2040 are detailed. According to the details on the N52 Ardee Bypass, the construction timeline for the bypass is 2024-2026, with a cost range of €20-€50 million.

According to the report, the proposed scheme will be a new single carriageway running mainly to the north of Ardee and comprise six road junctions, including a proposed roundabout on the N2, and two river bridge structures. The scheme will also include Active Travel elements including connectivity to existing walking and cycling facilities in Ardee.

Detailing the progress of the planned bypass, the report says that a review of the scheme is in progress, which includes a review of connectivity of routes and the geometry of the junctions. Part 8 Planning Application for the revised design of the scheme is currently underway and the Environmental Impact Assessment Screening and Appropriate Assessment Screening reports have been submitted to An Bord Pleanála and the findings have been accepted.

The report goes on to highlight that an application for leave for Judicial Review of the findings of the Screening Reports has been lodged and a hearing was held in April 2022 at the High Court. An Bord Pleanála is currently considering its position in regard to the Judicial Review. The report adds that the programme for delivery of the scheme may be significantly impacted by the Judicial Review process should it proceed.