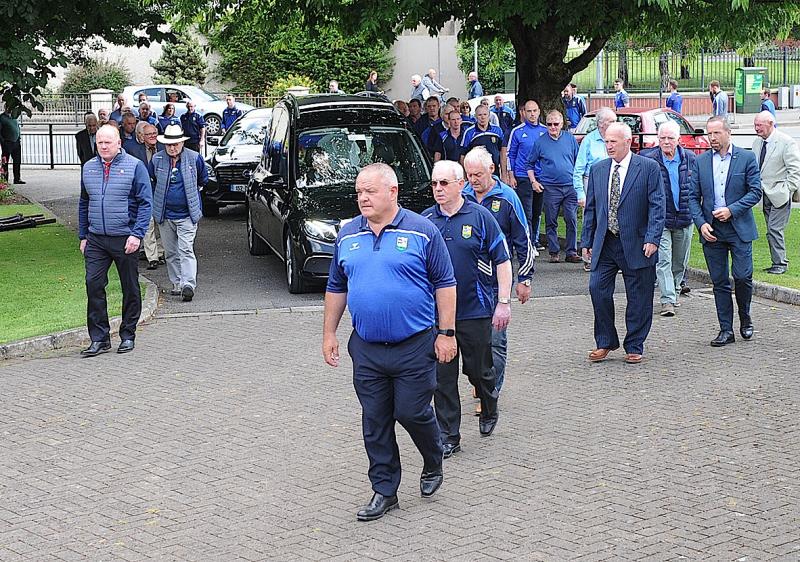 They came from far and wide for a celebration of Kevin Beahan’s life.

They were inter-county players there from many counties, most of them having strutted their stuff in days long gone.

Kevin Beahan was on his final journey in the town where was born, and where he learnt the rudiments of a game he would grace with such magnificence in years to come.

There were many references to Kevin having passed on on All-Ireland day in and around Ardee’s Church of the Nativity on Thursday.

That was no surprise, given that it was on the Gaelic football’s biggest day that his stellar career reached its pinnacle back in 1957.

Louth were out against Cork in late September, wearing the green of Leinster with Cork in the Munster blue.

The smallest man on the Louth side, standing at just 5’ 7”, was in the No 8 jersey, lining out alongside the 6ft-plus Dan O’Neill.

Sean Moore and Eric Ryan, neither of them dwarfed by O’Neill, were in direct opposition and had the better of early exchanges.

Kevin Beahan was switched to the right wing, and that was more to his liking.

Most valuable of his contributions to an historic Louth win in his new position was the perfectly-flighted sideline-kick he sent towards the Cork square.

Sean Cunningham got on the end of it, scoring a goal which paved the way for a 1-9 to 1-7 victory.

This and many more stories got an airing during and after the Requiem Mass, attended by another four others who comprised the Louth panel all of those 67 years ago.

Many others of recent vintage who wore the red jersey were also present.

Frank Lynch carried the jersey Kevin wore to the altar, along with the football that had been kicked around Croke Park.

The football is in the custody of Patsy Coleman, who started out the 1957 campaign as team captain, but having sustained an injury, passed on the armband to Dermot O’Brien.

But this tough-as-teak defender was back in good health for the final, lining out at right-half.

And he was there last Thursday, accompanied by his St Mary’s colleague, Paddy Lennon.

Also there was Jim McArdle and Sean Og Flood, the latter, thankfully, recovered from the ailment that laid him low a couple of years ago.

Jim was unlucky that having played a pivotal role in getting to the final, injury prevented him from taking his place at No 6 against Cork.

Robbie O’Malley was another All-Ireland scorer in attendance, the All-Star’s brace won with Meath in the late 1980s.

And although Offaly’s Charlie Wrenn and Phil O’Reilly didn’t win a title, they did next best thing, playing in a final.

Having figured on the side that beat Louth in the 1960 Leinster final, giving the Faithful its first senior provincial title, the two lads lined out in the half-back line in the following year’s All-Ireland final against Down in front of a crowd of 90-000-plus.

Their side was deprived by the minimum, Down taking a second successive title by 3-6 to 2-8.

Jimmy Whan, who carried the flag for Armagh for a number of years, the only one from the Orchard County to figure on three Ulster Railway Cup-winning teams in the early 1960s, played his club football in Dublin and was a close colleague of Kevin Beahan.

Pairc Ui Mhuire was the starting point for the cortege as it made its way to the Church of the Nativity on the last stage on its journey from Dublin, where Kevin spent his entire working life in accountancy.

It was flanked by St Mary’s officers and members, and Louth County Board officers.

Chief celebrant at the Requiem Mass was Canon Peter Murphy, who's assistants included the locally-born Fr Miceal Bennett, who, before joining the priesthood played with St Mary’s, and was alongside Kevin Beahan for the Ardee side’s 1968 championship win.

As we listened, we thought, what a pity it was Kevin didn’t pass on some of his football prowess to the young man.

Standing at over 6ft, there are few midfielders he’d have conceded height to, and if only half as good as the old man would have been a match for the best.

As was said quite often about Kevin this week, he’s gone but certainly not forgotten.