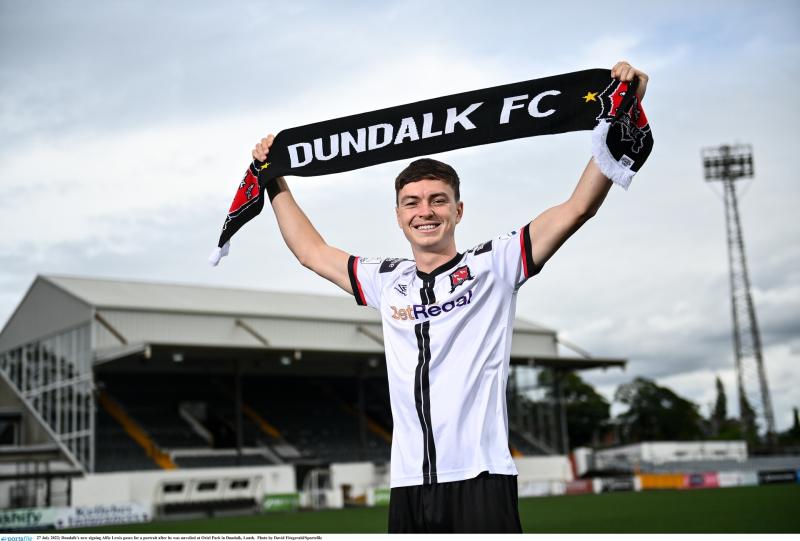 Dundalk's new signing Alfie Lewis poses for a portrait after he was unveiled at Oriel Park in Dundalk, Louth. Photo by David Fitzgerald/Sportsfile

Dundalk FC have announced the signing of Alfie Lewis who is joining the club on a permanent deal from Plymouth Argyle.

The 22-year-old Londoner, spent more than a decade at West Ham United as a youngster, moved to the English League One club in January after a successful 2021 season with St Patrick’s Athletic.

Under the guidance of Stephen O’Donnell and Padge Cregg, Pat’s won the FAI Cup and finished as runners-up and speaking to dundalkfc.com, Lewis said he was looking forward to linking up with the duo again.

“I had a good year under Stevie at Pat’s and that was one of the key decisions to come here,” he said. “I know how he and Padge work, what sort of intensity they expect in training, and the kind of football they want to play so it will be good to get back working for them again.

“I want to play football and get back to playing games and the League of Ireland was a good platform for me to do that last year. I learned a lot from playing competitive football and I can’t wait to get going again.”

Lewis also played alongside Sam Bone, John Mountney and Robbie Benson at Richmond Park and he said their presence at Oriel Park was another big factor in his decision to join the Lilywhites

“Yeah, I’m looking forward to seeing the lads again,” he said. “They really helped me a lot last year and I’ve no doubt they’ll do it again at Dundalk.”

Lewis will wear the number five shirt at Oriel Park and, speaking about his newest recruit, Lilywhites head coach Stephen O’Donnell said he was thrilled to land the talented midfielder.

“I had a really good relationship with Alfie when he came over first and I’ve kept in touch with him ever since to see how he’s been getting on,” said O’Donnell.

“It’s something we didn’t foresee coming but a little window opened up and there was an opportunity to get him in so I’m delighted we have got it over the line because he brings real quality to the squad.”

Lewis is the club’s third new acquisition of the summer transfer window following the earlier arrivals of Robbie McCourt and Rune Hauge and O’Donnell believes Dundalk have conducted some excellent business.

“We want to attract good players and make Dundalk attractive again for players to come here,” he said. “I think Alfie is one of those types of signings that show that, as do Runar and Robbie.”