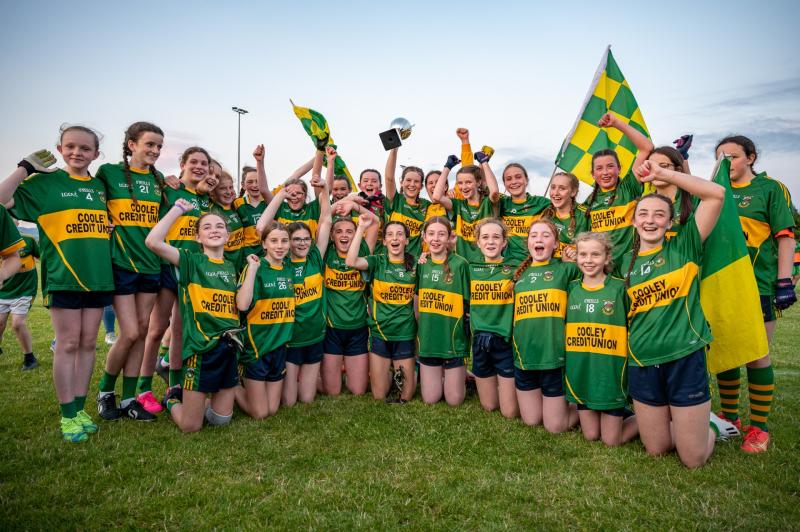 Finally, after what seemed like an eternity, the postponed final between these neighbouring clubs was upon us. At a later than normal start time of 8.15pm on one of the warmest evenings of the summer the convoy from the Peninsula set upon Dundalk, bellies full of butterflies.

The first whistle blew and it was evident this battle, held at the home of the Young Ireland’s, was not going to be won easily.

First point of the match came from Cooley captain Emma McCarragher. This was answered immediately by a goal from the Pats, before a super block by full forward Ella McMahon hit the back of the net to give the Girls in Green the lead again.

Two more points for the opposition was followed by a lull in scores, but 1-1 from the Cooley captain kept her side ticking over.

They were dealt a bitter blow when giving a late penalty, however Molly Thornton did well and made a crucial save to leave it all square, 2-2 apiece at the break.

Only the mentors and players know what was said at half-time and whatever it was, The Peninsuls Girls returned to the field with a renewed determination, hunger and fight which saw them take control of proceedings. A goal from Nessa O’Neill helping their cause.

Full composure wasn needed and their backs didn’t disappoint. Charlotte Hanlon, Holly McGrath, Mary McCormack, Lucy McArdle, Niamh Arnold and Clíodhna Hanniffy all put in great shifts, maintaining the philosophy of “no goals, no goals” that echoed from the sidelines.

Everyone worked tireleslly clearing the lines, doing all they could to get the ball back out to midfielders Katie McDonald and Jessica White.

Kate was also getting back as cover, her backup on leading to points via Sarah Duffy and McDonald.

The Forwards were now looking even more dangerous, as was seen through a spectacular goal from Molly-Ann O’Sullivan. The Pats replied with a point of their own, but this was followed by McCarragher and Duffy raising green flags to increase the Cooley lead.

The Lordship side continued battling bravely to the final whistle, kicking the final point of the game but it wasn’t enough to stop the momentum of the Kickhams, who notched up an impressive 11-point victory to become county champions.

Glen Emmets triumph in decider against the Joes

Glen Emmets and St Josephs contested the under fourteen B Championship final in what turnedout to be a classic encounter.

This was most definitely a game of two halves where the Tullyallen outfit dominated the first half with the aid of a slight breeze.

They scored some beautiful scores with some great combination play resulting in a half time lead of 3-4 to 0-2.

In the second half the St Josephs came out with a steely determination to get back into the game and this they did with great effect.

They continued to narrow the gap during the second half, but the Glen Emmets rear guard defended stoutly.

They were able to get a number of scores to keep them in front. Right up to the final whistle the result was in doubt, The Girls from Dromiskin continually closing the gap.

However, Glen Emmets heroically held on for a super win, narrowly coming out on top by two points in the end.

Both teams can be proud of their performances on the day, but as the saying goes there can only be one winner.