“Everyone at the club is doing their best to keep Mark," O’Donnell hopes for Connolly deal 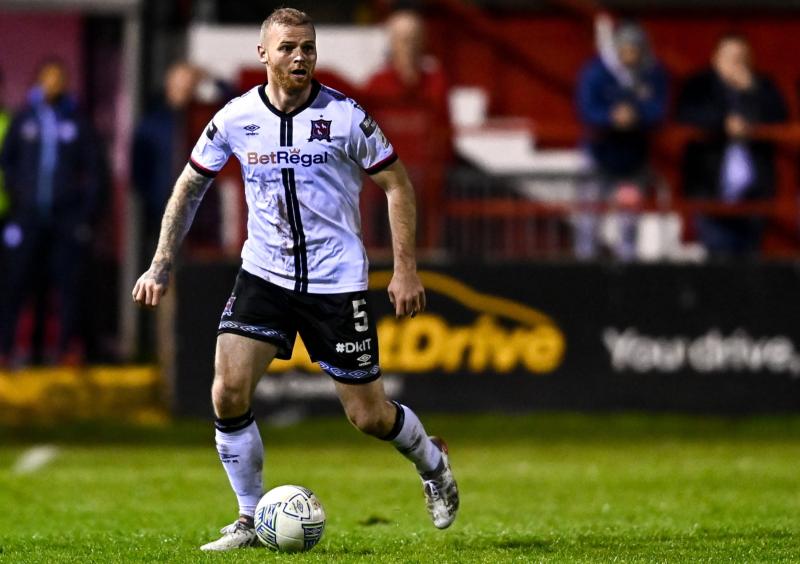 Dundalk FC are working hard to revive Mark Connolly’s spell at Oriel Park after the defender was recalled by Dundee United before Friday night’s 3-0 win over Finn Harps.

Connolly joined The Lilywhites on loan from Dundee United in January and has ever since been a stalwart at the back, picking up the Soccer Writers Player of the Month award a day before his 20th and last game in the recent 1-1 draw at St Patrick’s Athletic.

The 30-year-old Clones native was a notable absentee for Dundalk’s latest SSE Airtricity League fixture versus Harps at Oriel, with the club announcing about an hour prior to kick-off that he had swiftly returned to his parent club in the Scottish Premiership.

However, Dundalk head coach Stephen O’Donnell hasn’t given up hope of re-signing Connolly before the conclusion of the July transfer window, with talks ongoing between themselves and Dundee United, where the defender has one year left on his contract.

“I’d hope so, there’s always a chance (of him coming back). It has to be right for everyone. It’s not just black and white and simple. There’s a lot of things at play, but everyone at Dundalk is doing their utmost to keep Mark.

The Democrat understands Dundee United are looking to offload Connolly, who doesn’t feature in their plans; cue interest from Dundalk, Derry City, Glentoran and Linfield.

Indeed, he wasn’t part of Dundee United’s matchday squad for a 2-1 defeat away at Fleetwood Town on Saturday afternoon, which was the last of their pre-season friendlies.

With the window ending this coming Sunday, the Dundalk boss confirmed that new additions to his squad are a possibility, but that nothing was close at the time of writing.

“There’s nothing very imminent, so we’ll keep working at that. We’ve a week to play with now, so we’ll see. We’re always on the lookout for good players, but there’s nothing going to happen in the next day or two.”

One player that will feel like a new signing for Dundalk is John Mountney, who made his long-awaited second coming in the 3-0 win over Harps, playing the final 15 minutes.

Mountney hadn’t kicked a competitive ball since lining out for St Patrick’s Athletic against Dundalk just shy of one year ago as a result of a knee injury sustained that day.

“He deserves that,” said O’Donnell. “He played 90 minutes against Shamrock Rovers in the U19s league last Sunday, so that was the second 90 minutes. After he got two under his belt, I thought he’d be a legitimate option and he is that now and it was great for him to get 15-20 minutes tonight.”

O’Donnell also confirmed that first-choice goalkeeper Nathan Shepperd, who sat out the last two matches because of a shoulder injury, was set to resume full training this week.

“He’ll train all week and we’ll see how he goes then, but I thought Peter (Cherrie) was brilliant tonight and he was very good last week too.”

However, Robbie Benson is a doubt for this Friday night’s Extra.ie FAI Cup first-round tie with Longford Town at Oriel (kick-off, 7.45pm) after missing the game against Harps.

“Robbie hurt his shoulder and he had a little bit of a midriff injury, so we’ll see how he progresses over the next week or so.”

After knocking The Lilywhites out in the semi-finals, the current Dundalk boss guided St Pats to FAI Cup glory last term – a feat he’ll be dreaming of repeating come November.

“You only can play in two competitions – the league and the cup.
“All focus was on the league tonight and our total focus now for next week is on the cup.

“They have good players and a lot of players that played Premier Division.

Friday night’s FAI Cup first-round match between Dundalk and Longford will be refereed by Alan Patchell (Dublin) and can be streamed live on LOITV for a price of €7.