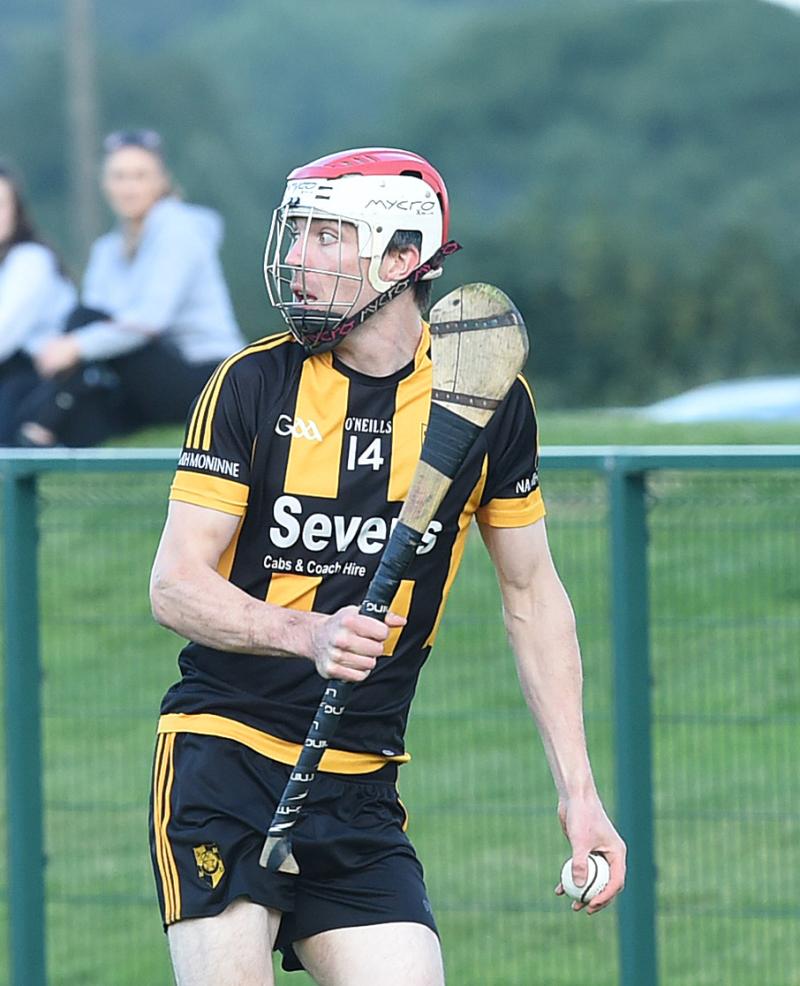 Andrew Mackin eyes up a score for Naomh Moninne

This year’s Louth Senior Hurling Championship Final for the 'Paddy Kelly Cup' on Sunday week, will be a repeat of the 2021 final between holders St Fechins and Knockbridge.

The records will show that the Termonfeckin outfit have reached the final without winning a game but when the competition is contested by only three clubs that is always going to be a possibility.

Spectators at Pairc Ui Mhuiri, Dunleer last Thursday evening were treated to a championship encounter worthy of a final, in what was a terrific advert for adult hurling in this county.
Naomh Moninne were understandably disappointed with this result as was their manager John Murphy who is in his first year as manager of the Dundalk team.

The club had a different reason to look to the future as they held their first juvenile training session at their new pitch development in Toberona on Saturday afternoon.

Moninne produced their best hurling in the first half of this clash and led by five points at one stage but as holders one can't deny the spirit of this St Fechins side, managed this year by Niall McEnaney.

This match was certainly keenly contested with the sides level on no fewer than nine occasions including the one time that meant most to the Fechins, the full time whistle.

Both sides had lost their opening games to Knockbridge with St Fechins losing by two points less than Naomh Moninne therefore earning their place in the Final on a better score difference.

The Dundalk outfit opened brightly when full forward Dylan Carey set up Mark Gahan to fire over the opening point after just 30 seconds.

Carey himself then grabbed the games first goal when he fired past County keeper Rory Morrissey on two minutes.

The Fechins responded to this early setback with three successive points, two of them scored by their impressive centre half forward Seaghan Conneely in between which Paddy Lynch fired over a 55 metre free.

Mark Gahan had a good goal chance blocked out for a 65 metre free before Danny Morgan tied up matters with a good point on 10 minutes.

Darren Geoghegan fired over a long range point on 12 minutes to restore Moninne's early lead but two quick points from Lynch and Morgan had the Fechins in front for the first time 0-6 to 1-2.

The sides were level again when Geoghegan struck over a free from the half way line before Carey and Gahan combined again with the latter finishing to the net for Moninne's second goal on 15 minutes.

They went four clear with another Geoghegan free and were good value for this lead.

The sides shared the next two points before Danny Morgan's third point of the half was quickly followed by a Seaghan Conneely goal off the end of a solo run, all square again.

Mark Gahan and Michael Byrne exchanged points before Geoghegan's fourth point of half was followed on 25 minutes by his side's third goal scored by Conor Murphy who was found from long range by Diarmuid Murphy.

Moninne's lead was still four as the half entered injury time.

A Darren Geoghegan pointed free from the right wing had them five up. Paddy Lynch intercepted a loose pass from defender Stephen Rafferty and soloed through before firing high to the net past keeper Donal Connolly.

He added a long range point from play to leave the Fechins trailing at the break by 3-9 to 2-11.

It did not take long for the Fechins to draw level on the resumption, in fact it was straight from the throw-in that Sean Kerrisk was played in for an equalising point.

They went in front for only the second in this match when the lively Michael Byrne fired over a good score from the right of the post.

From a foul on Dylan Carey, Darren Geoghegan struck over the resultant 20 metre free.

The black and amber outfit grabbed their fourth goal on 39 minutes when Kilkerley youngster Fionn Cumiskey netted from close range.

Midfielder Donal Ryan responded with a point from 30 metres before keeper Donal Connolly denied the Fechins a third goal with a good save from Seaghan Conneely's effort.

Both sides wasted chances as we went the next six minutes without a score.

From a foul on County regular Peter Fortune it was Paddy Lynch who pointed and on 50 minutes Donal Ryan grabbed his second point of this enthralling encounter, 4-10 to 2-16.

Moninne once again came up with important scores as Conor Murphy fired over a terrific point from out on the left wing to nudge in front once again.

Lynch and substitute John Crosbie responded with a quick brace of points and from a foul on Seaghan Conneely it was Lynch who pointed to leave the Fechins two up on 58 minutes.

Andrew Mackin and Sean Kerrisk exchanged points but it was Moninne who found some late resolve to fire over points from the sticks of Diarmuid Murphy and Mark Gahan to tie up matters well into injury time.

The silence that greeted Kevin Brady's final whistle did not last long as the realisation finally dawned on the St Fechins players that the draw was enough for them to qualify for the final on Sunday week.