Crowds are back as Dundalk Stadium celebrates its own ‘Twelfth’ 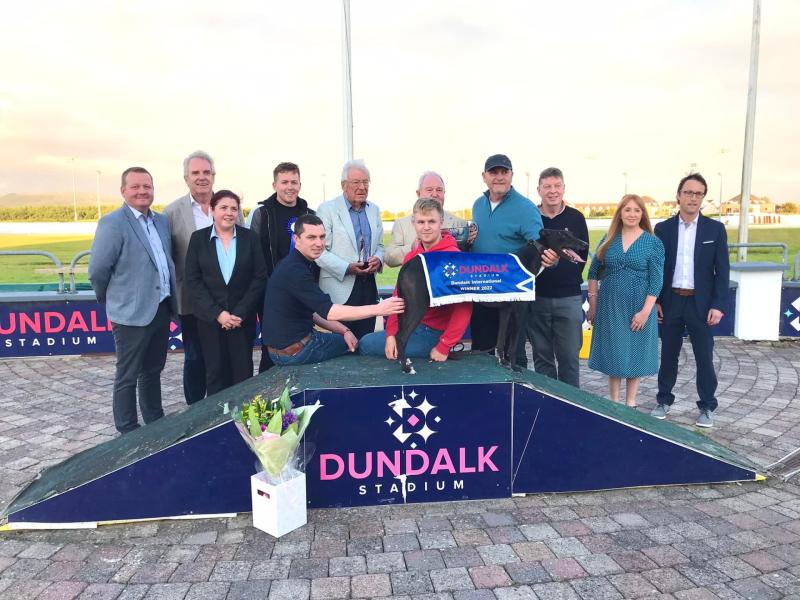 Explosive Boy, winner of the 2022 Dundalk International, alongside the winning connections

There was lots of noise and some parading, but no drum-beating, at Dundalk Stadium’s big 12th of July celebration on Tuesday last. Horse racing in the afternoon was followed with greyhounds strutting their stuff later in the evening, and for many, the huge crowd and the excitement it generated was a reminder of olden days.

It was August, 2007 all over again. That was when the track staged its first all-weather race meeting, and, as was the case then, the place was thronged.

For three years prior to that, the newly-opened dog track was the proverbial hive of activity three nights a week. A line of bookies went head-to-head with the most intrepid of punters, and some of the best greyhounds in the country vied for big money in graded and open racing.

That scene may not have been fully replicated the other night – for starters there are just two bookies now operating. But there was another huge crowd, and though the big race, the Dundalk International, had no English runners, the field was reckoned to be the classiest in a quite a while.

The track management’s decision to heavily advertise the day’s activities paid dividends. It was the first time since 2019 that there’d been such a gathering, Covid-19 having been a spoilsport for the past two years.

The weather was at its best throughout the afternoon for the seven-race card; and with a hugely attractive prize on offer, ladies were out in all their finery, vying for the title of best-dressed.

Favourite-backers had a good start, getting a return in the first two races. But things went sadly awry after that, especially for those who supported Honey Girl in the fourth.

No better than 5/1 on was available about this lassie, and though in with every chance as they reached the line, Ben Coen’s mount had to give way to Illuminazione, beaten by the minimum distance.

It was better for the market-leader in the greyhound International. Explosive Boy, named the country’s outstanding runner last year after a succession of competition wins, in addition to reaching the Irish Derby final, was made favourite after the draw had been made, and the Pat Guilfoyle-trained dog came in for further sustained support just before the off.

Backers of the blue-sheeted runner had to wait until late on before they could consider counting their winnings. Singalong Sally made a smart break, helping her build a two-length lead going down the back.

Explosive Boy, however, was always going well in second, and after turning for home, he moved on to the leader’s shoulder and then passed her.

Just over a length separated them, with the winner’s kennelmate, Good Cody taking third place. It was the third success for trainer Guilfoyle in the race, and all going well he’ll be taking Explosive Boy to Shelbourne to challenge for the Derby.

Local winners are always warmly received, and on this occasion there were four. Mustang Joey, jointly-owned by former senator, Jim D’Arcy, and trained in Blackrock by Vivian Sands, was a superb winner over the 400, and the probability is he’ll have an entry in the upcoming Bar One Irish Sprint Cup at the track.

Ocee’s Bud runs in the name of Quay native, Pascal Sage, and Margaret Kelly from Lurgan, and in recording a win in the IRGT Bitch final, this lassie clocked an excellent 28.55 for the 525.

The Ardee-based David-Gerry- Danny Syndicate took the Gain 525 with Crafty Bonanza, and John Downey, from Tullyallen, saw his Mustang Morocco win the Bar One Racing final in fine fashion.