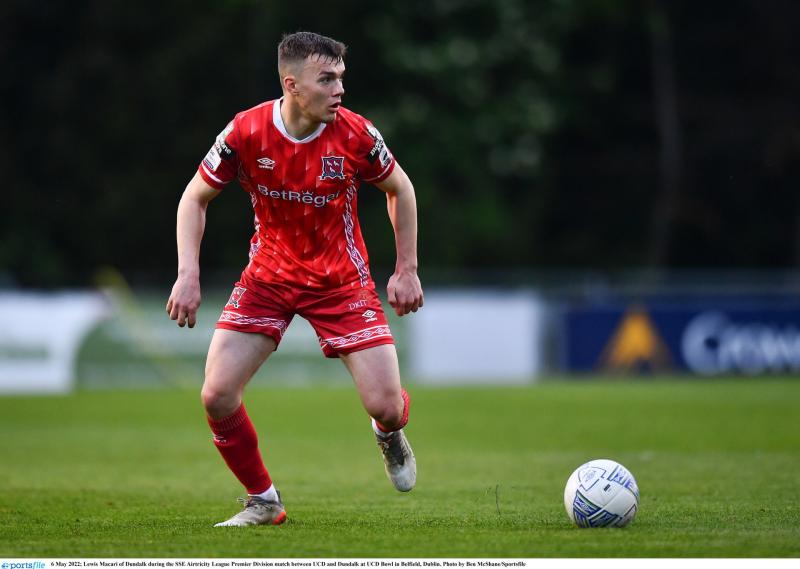 Lewis Macari of Dundalk during the SSE Airtricity League Premier Division match between UCD and Dundalk at UCD Bowl in Belfield earlier this year. (Photo by Ben McShane/Sportsfile)

Despite brilliantly clearing Filip Mihaljevic’s effort off the line when the sides last met at Oriel in a 3-0 win in February, the 20-year-old was substituted after playing just 25 minutes, having endured a difficult spell playing in an unorthodox left-back position.

The Commentary Box: Another managerial dismissal could prove costly for Dundalk

Macari played his part in Daniel Kelly’s decisive winner when Dundalk overcame Harps 1-0 in Ballybofey in May – one of only two wins on the road for The Lilywhites this year.

“I remember the home game obviously,” Macari told The Democrat. “I didn’t have my best of games there. That’s when I got taken off after 25 and I feel like we struggled in the first half really. We managed to break them down and we won that game 3-0 in the end.

“Away from home, it was a tough game and they piled the pressure on us the last 10-15 minutes. We’re expecting another tough game next Friday, but hopefully we can just try and pick up another win at home and keep that record going at home and then when the away games come, improve on them.”

Having joined Dundalk on loan from Stoke City at the beginning of the season, Macari has cemented himself as one of the automatic names on Stephen O’Donnell’s teamsheet.

An ever-present, he’s featured in all 23 of Dundalk’s fixtures this year and although he has yet to get himself on the scoresheet, a number of assists have been credited to him.

His loan was recently extended for the remainder of the campaign, and Macari is satisfied to focus on keeping Dundalk in the top three between now and November.

“There was a time, a few weeks leading up to when I signed anything, where I wasn’t quite sure if I was staying. I was going, is this my last game or not? But, as soon as I signed, I was happy because now I can just focus on playing for Dundalk, taking each game as it comes and trying to help the team.

The right-back, who is a grandson of former Manchester United and Scotland international Lou Macari, also explained how he initially started out as a centre-half.

“When I was playing U23s back at Stoke and U18s, I’ve been mainly playing centre-half. At first-team level, they weren’t quite sure if I was tall enough to be a centre-half, so they tried to push me out to right-back.

“I came here to play right-back and I feel like it’s definitely helped me. I’ve improved a lot in that position I think and hopefully I can just keep getting better and better there and improve defensively and offensively as well. I feel like that’s probably going to be my position going forward for now.”