“It’s like an extreme sport if you’re not into sports.” 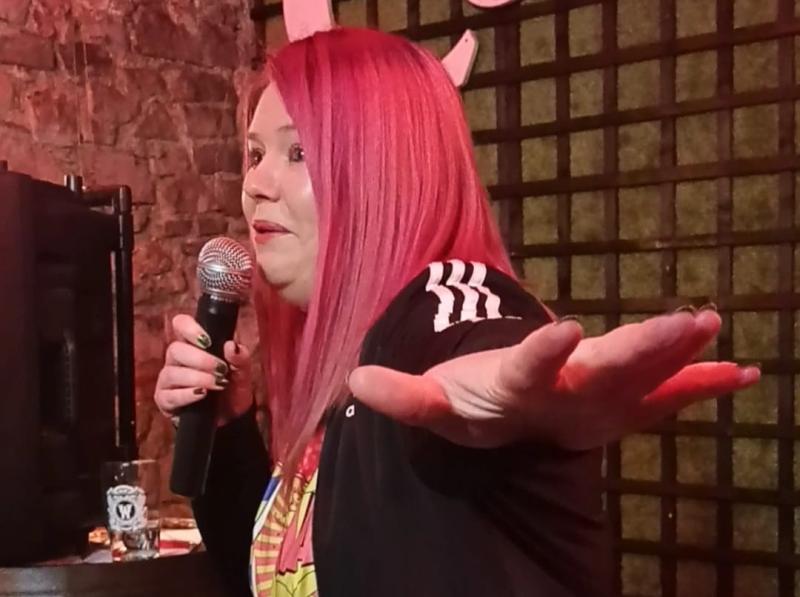 Sinéad, who is originally from Pearse Park, started comedy while teaching in Myanmar in 2015.

“I was living over there as a teacher and I saw a workshop that was on and thought I’d give it a lash and the guy that was doing the workshop told us we were going to do a gig in two days time, so we were literally thrown in the deep end.

“I always wanted to do it but I never thought I would because it’s scary, but I think the mixture of actually going to the workshop and signing up and being told this is what you’re doing helped.

“The fact I was living abroad also helped, if I did badly I could have just left the country,'' she laughs.

Having got a taste for it, after her first gig Sinéad threw herself into the world of stand-up comedy.

“I did eight gigs in Myanmar and then came home to study to be a primary school teacher and put it to a halt while I was doing that.

“I qualified in March 2020 and by then I was ready to start back at it, but obviously that was right at the lockdown so I’ve really only started back properly in the last few months.

Struck by the lack of a comedy scene in the town she’s decided to have a go at creating one.

After being prompted by friends to do some of her stand-up at an open mic night in the Tipsy Cow that’s usually held for musicians, she decided to set up a dedicated comedy night.

“They [the Tipsy Cow] have been very supportive of new acts coming from the town and they’ve given me free rein to do whatever I’ve really wanted to do.

“There’s no real comedy scene in Dundalk and that’s why I really want to start something.

“If you’re a famous comedian you can get a gig in the Spirit Store and that’s great, but where do you start off?

"There is nowhere to start.

“There’s not going to be any big comedians if they have nowhere to start, that’s my primary school teacher instincts kicking in there, to provide a place for people to learn and to practise and to do well.

“I’ve been up in Dublin and people are fighting for places all the time, to even get five minute gigs.

“That's all you get is five or seven minutes and I find it very annoying because I like to tell a story that’s at least fifteen minutes long.

“For me the reason I’ve been able to hone my craft is being able to do forty minutes in the Tipsy Cow.

“I have loads of people from Dublin and all around the country already messaging me asking for a space so there needs to be a place in every county for comedians to come up.

“I'd like to put a call out to local comedians with experience and also to anyone who is interested in giving it a try.

“I'm very interested in supporting people who always thought they'd like to try comedy but haven't had the opportunity yet.”

Sinéad says the event is for anybody regardless of experience level and while it may be daunting at first they won’t regret it.

“As I child I’d be reading joke books and making up jokes in my head and although I always thought I could do anything the one thing I thought I couldn’t do was stand-up because it’s public speaking multiplied by millions.

“But once you do it once or twice you find your feet.

“Even if you’re going to do it just to say you’ve done it once it’s an amazing feeling.

“But I’ve a funny feeling that if anybody does it once they’ll be addicted to it and they’ll be back again and again because it’s a feeling that you can’t really get off anything else.

“It’s like an extreme sport if you’re not into sports.”

The first comedy night at the Tipsy Cow will take place on 7th July starting at 8.30pm with all welcome, regardless of experience.