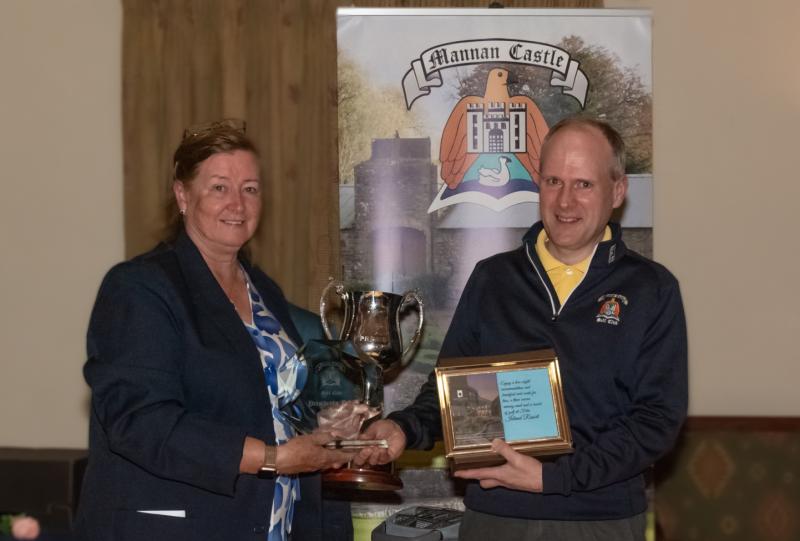 An excellent turnout was had for President Deanna McGuiness`s Prize at the weekend and Deanna greeted every golfer on the first tee which was very well received by everyone taking part.

All had high hopes of qualifying for the infamous playoff on the Sunday evening. But alas, only the top twelve had the good fortune. The course played its part in what was a fantastic weekend of golf.

34 points was enough for the last person to qualify, which just goes to show how tough our course was playing. As per tradition the president picked the pin positions and all agreed there was a few challenging pin placements.

President Deanna made a presentation to each of the qualifiers on the steps of the clubhouse before the 9-hole playoff.

In what was a very tight affair, only five points separating the twelve players, there was a sense of optimism in the air as all 12 golfers approached the first tee.

The worthy winner Tom Kevin had a 3-point deficit to overturn as he began his final nine holes and with a fine par 3 on the first, he was off to a great start.

A further sixteen points on his final eight holes was enough to see him claim the first Major of 2022. Tom was in the dream position of having a four-point lead standing on his final tee box.

Congratulations to Tom who proved to be a very popular winner. Second place went to Cliff Clinton who shot a super round of 39 points in regulation.

In the playoff Cliff will look back at somewhat of a missed opportunity carding five 1-pointers in the first six playoff holes to see him finish a solitary one point behind our winner Tom Kevin.

Third place went to Sean O`Rourke who was appearing in his first ever playoff.  Sean will have learned a lot from this outing and no doubt we will see him in many more playoffs in the not-too-distant future.

An inauspicious start by Graeme Woodcock was quickly put behind him with six pars in the final 7 holes recording an exceptional 22 points for the nine-hole seniors. This beat Eamon Trainor into second place who had four pars in his excellent 20 points.

This week's competition was to choose three category winners who would represent Mannan Ladies in the Peggy Nelson Trophy final as a team.

A couple of pars and a great birdie in the 8th hole, together with lots of composed play over the 18 holes, helped Cepta Maddick to the best score of the day with 39 points.

Gill Rouiller and Angela McBride, who both returned 31 points, complete the team as top qualifiers in their respective categories.

The fearsome trio will now advance to the final in Dunmurray on July 4th, where they will undoubtedly put in a tremendous performance in Mannan colours on our behalf, and we wish them the best of luck.