Smell of success for students' idea for stinky sneakers 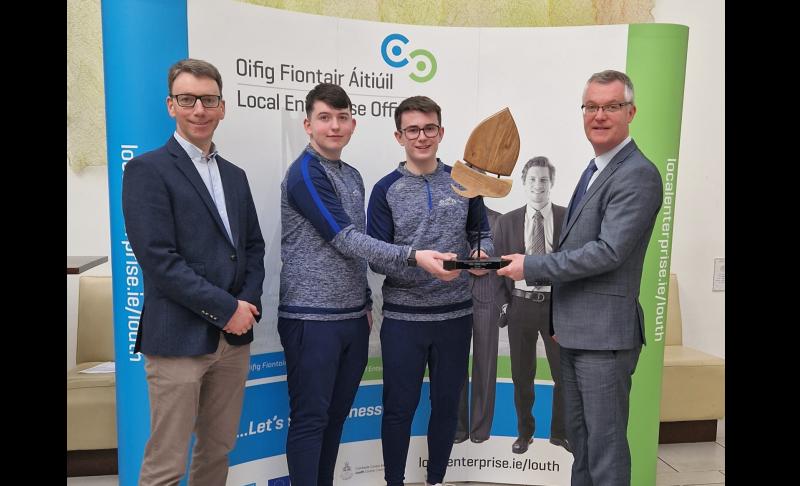 Ardee Community School have congratulated their TY students, Ronan Tallon and Cillian Mc Cullough on their success this year with their Enterprise programme company, ROCI sports.

As part of the TY Enterprise programme, students are asked to come up with a business idea with their Enterprise teacher mentoring them on the path of setting up a business from scratch.

From idea generation through a variety of stages such as financial planning, procurement, production, marketing and sales to name a few.

Ronan and Cillian, being keen sports enthusiasts, recognised a gap in the market of a common problem, (one usually voiced by their parents!) , the, shall we say, unpleasant, smell of their football boots after a training session or match.

Their idea to combat this common problem started evolving piece by piece, finally making it into a real product ready to launch to the market.

Their deodorising bags were made with a clever charcoal deodorising; detachable insert quickly stirred a lot of interest.

Set at a very affordable price, their product was a great gift idea with the option of personailised bags with initials.

As part of the programme, the most impressive teams, based on their idea, compiling a full, detailed business report and a promotional film piece, are chosen to enter two competitions, Enterprise Ireland and the NFTE programme by Foroige.

During a tense live county final live YouTube seminar, we were thrilled that ROCI sports had successfully won the biggest achievement in the county finals, winning the best idea, a spokesperson for Ardee Community School said.

They had been up against over 20 schools in Louth and would now go on to represent Louth in the National finals.

This win, along with two other teams from the school, Bee and Bee and Blooming Wheels meant Ardee Community School had their most successful year to date up at the finals by winning specialised category prizes.

Unfortunately, they didn’t win the all Irelands this year in Enterprise Ireland but any disappointment was soon followed by an exciting update from the other competition ran by Foroige.

The boys were chosen to represent their school in the north Leinster finals.

This included what felt like a Dragon’s Den pitch via an online zoom to five judges where the boys had a seven minute presentation and eight minute question and answer time with the judges.

Again the boys were successful, wowing the judges with their innovative, sustainable and environmentally friendly product and sparking personalities of course!

They were now in the top six teams in the National finals. For this, the boys had a similar 15 minute zoom slot in which to pitch their idea to a new panel of Judges.

We are very proud to announce they finished in 3rd place in all Irelands, the highest achievement ever reached in the school before, the school spokesperson said.

“The business department, in particular, would just like to recognise the amazing achievements of Ronan and Cillian and would like to thank you for all your hard work and dedication throughout the year, your future is very bright!” Joanne Finnegan, Enterprise Teacher.