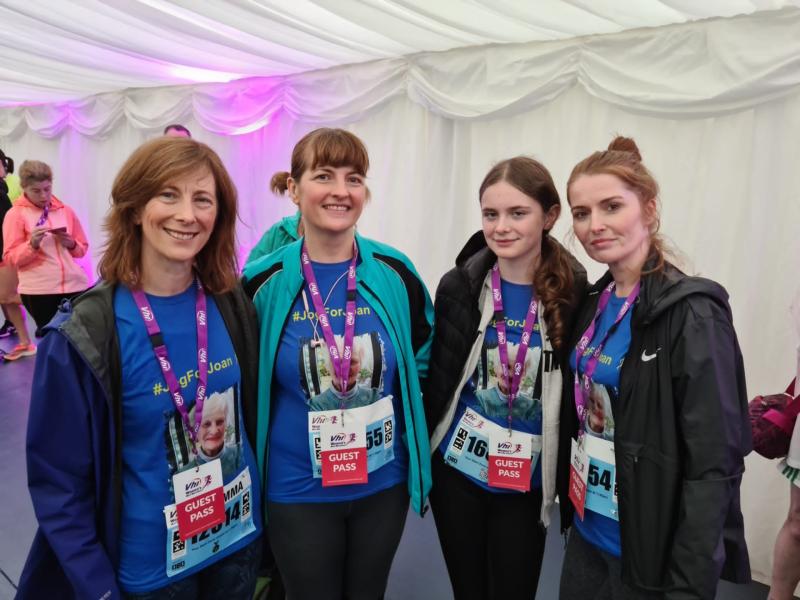 It was a momentous day when the family of the late Joan Brady, well known around Dundalk for her yearly participation in the Women’s Mini Marathon, as they collected her 40th medal on the 40th anniversary of the event.

Joan had completed all previous 39 marathons, including two virtual ones held during Covid, and was preparing for her 40th when she sadly passed away in March this year at the age of 83.

Determined to finish what she had started, members of Joan's family including her two daughters, Helen and Susan Brady, niece Alva Brady and daughter in law Emma Cooney, decided to run the 40th marathon in her honour and collect her medal.

“My mum was all ready to do this mini marathon. It was the 40th one and she did every single one each year and it was the highlight of her year for sure,” her daughter Helen told the Democrat.

“So we decided because she passed away there at the end of March the four of us, myself, my sister, my sister in law and my niece would do the marathon in her honour to get her 40th medal.”

Joan, previously worked in the advertising section of the Democrat and was well known around the town for her work with local charities and as a campaigner for Amnesty International, and as late as last year was still organising art competitions in local schools.

“She worked with Amnesty International for years on the peace train and she was involved in all sorts of different groups.

“When she stopped working that's what took up her time.

“There she met like minded people who were also involved with those groups, she loved getting involved and keeping up with current affairs.

“She never smoked or drank so that was kind of the social part of her life,” Helen said.

But, perhaps what Joan was best known for was her yearly running of the Women’s Mini Marathon beginning with its inception in 1983, along with setting up the Dundalk Joggers walking group.

“She started back doing the first one in 1983, she was in New York in the early 80s and she just noticed that there were loads of groups of women in Central Park together doing organised walks and she just thought that it was a great idea to take back to Dundalk,” Helen explained.

“As some of them have moved on and decided to not do the marathon anymore then their daughters have joined the group and it's just gone on like that.

“Back then there wasn’t anything like that around and my mother was a big talker so it was just a way of meeting up with other women to do their walks on an evening in a safe group so they’d go out two or three times a week and she just kept at it.”

“She was 83, but God she was like 20 years younger than that, she was as fit as a fiddle, in recent years she had stopped jogging the whole thing and would walk it but that was her way of keeping fit, she was always playing tennis too.

“That's why we were so surprised when she did pass away because she was such a fit woman.”

Joan’s legacy was honoured recently when her family completed the Mini Marathon in her memory followed by a presentation by the organisers.

“We got on grand, although the weather was awful we all kind of finished around the hour mark within a couple of minutes of each other.

“We were all delighted but it was very wet. We were soaked.

“It didn't stop raining the whole day but there was a really good atmosphere.

“All the ladies who have done every single marathon were there and they lead out the marathon.

“There's only 13 of them left so it was nice to meet them.

“Then they made a special presentation for mum for outstanding recognition recognising that she would have been at every single race and the money she would have raised over the years.”