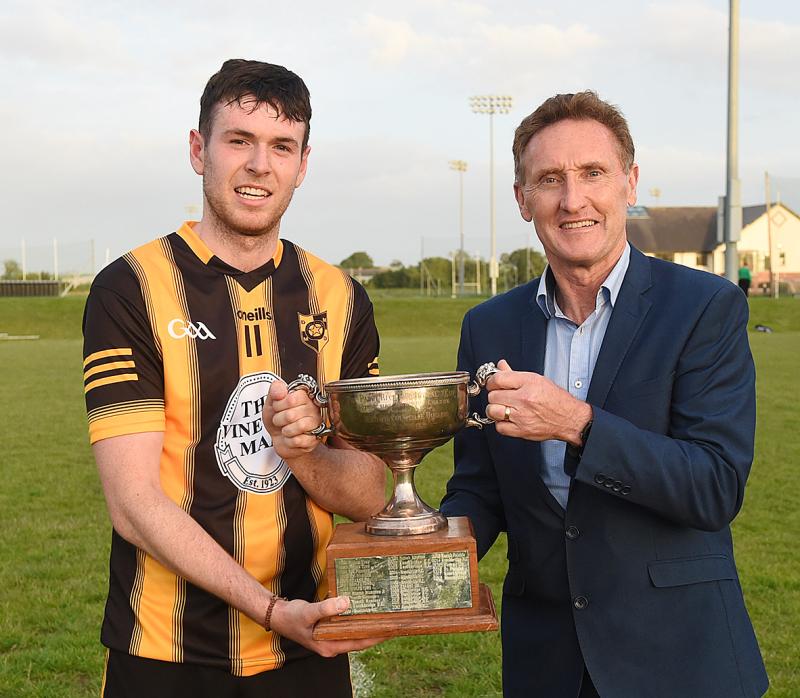 Six months into the year the hurlers of Naomh Moninne and St Fechins finally got the opportunity to contest their 2021 League final and it was certainly worth the wait as both sides produced a thrilling encounter in Darver last Thursday night.

The Dundalk side found the net in the game's very first attack as midfielder Andrew Mackin took a pass from his county colleague Darren Geoghegan before firing past the keeper from close range.

The sides then exchanged pointed frees before three unanswered points from David Stephenson (2) and Peter Fortune had the Fechins back on level terms on 9 minutes 1-1 to 0-4.

Ciaran Walsh was denied a second Moninne goal by a good save from keeper John Crosbie. A long range free from Stephenson had his side in front for the first time on the quarter hour.

The black and amber outfit then grabbed three points in a row from the sticks of Mark Gahan, Ultan McEnaney and Darren Geoghegan (free) to lead by two.

The Fechins went one better grabbing four unanswered points including two from corner forward Sean Kerrisk.
Gahan and Kerrisk then exchanged good points from play before an injury time long range pointed free from Stephenson had the Fechins leading at the break by 0-11 to 1-5.

They extended their lead to four with a good point from Hodgins straight from the throw in.

Moninne responded with a Darren Geoghegan point from a 65 metre free added to almost immediately by a point from full forward Dylan Carey set up by half back Stephen Rafferty.

The Fechins then opened up a considerable lead with five unanswered points from five different players in as many minutes.

Firstly Seaghan Conneely fired over one handed, which was added to in quick succession by scores from Hodgins, substitute Michael Byrne, Peter Fortune and Paddy Lynch, 0-17 to 1-7.

To their credit Moninne responded with quick points from Geoghegan and Ciaran Walsh. They then had keeper Donal Connolly to thank for keeping them in the game when he saved well to deny Seaghan Conneely.

The Fechins appeared on course for victory on 43 minutes when a Donal Ryan point had them six to the good.

However over the next ten minutes that lead was reduced to two as Moninne displayed their never say die attitude.

A Mark Gahan point was almost followed by a goal as Dylan Carey's close range effort crashed off the crossbar.

Despite this setback they added good points from Geoghegan, James Murphy and Gahan again to trail by two, 0-18 to 1-13 on 53 minutes.

All this good work appeared to be undone when a David Stephenson point was followed almost immediately with the Fechin's only goal scored from close range by Sean Kerrisk.

Few would have predicted what ensued over the closing minutes of this entertaining encounter.

Unbelievably a third Moninne goal scored by Mark Gahan tied up matters and with extra time looming they were awarded a free for a foul on Ultan McEnaney who punched the air both in determination and delight.

It was left to the ever reliable Darren Geoghegan to fire over what turned out to be the winning point greeted with great celebration by Moninne supporters.