Trip Through Time: What cars were manufactured in Dundalk in the 1960s? 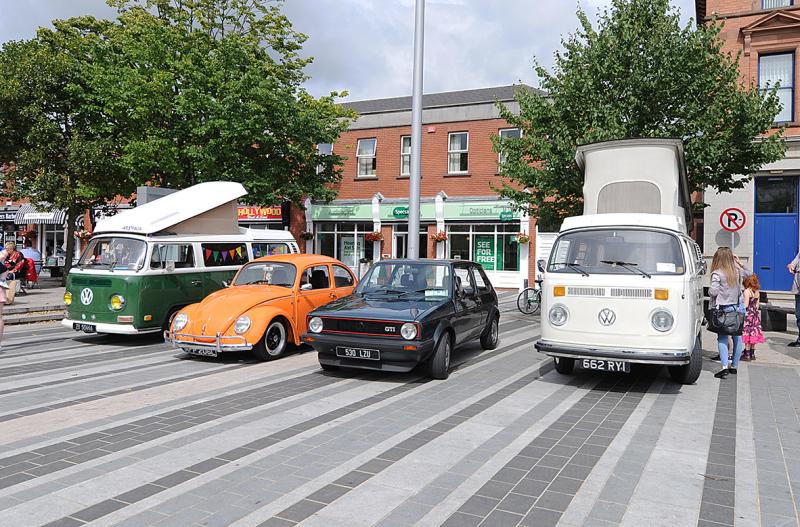 What cars were manufactured in Dundalk in the 1960s?

Named the 'Heinkel' after the German company that designed it, the Heinkel Cabin Scooter was manufactured by a subsidiary of the Industrial Engineering Company, one the industries that was set up at the old G.N.R. (I) Locomotive Works at Ardee Road after the G.N.R. Works closed in October 1958. Most of these small cars had three wheels but a number were made with four. The project, at first, seemed very successful but these small cars did not sell well on the British market because of a resentment that lingered after the Blitz by German bombers of the same name during World War 11. The Dundalk Heinkel Company was liquidated after two years production in 1961 and the enterprise became one of 'might have been' successes for the area.

What was the nickname of the large workshop at the D.E.W.?

This large galvanised building beside the main Dublin/Belfast railway line, was constructed about 1959, on the instructions of A. P. Reynolds, the Government appointed Chairman of the D.E.W., to construct rolling stock for the railway system. It was added to by Norman Carter when he was appointed C.E.O. Carter had plans to make carriages and wagons for rail systems around the world. The large building was known as 'Croke Park' by the men who worked in it, possibly because of its size, but there is also a belief that it was because Louth had won the the All-Ireland senior title in 1957 and there was great enthusiasm for sport among men who worked there!

Which Dundalk man was appointed an early Minister for Defence?

Peter Hughes from Park Street was appointed Minister for Defence to the Free State Government in November 1924 and held the post until 1927. He was not, strictly, the first Irish Minister for Defence, as many believed, but he was the first to hold that post on its own! Hughes was appointed by William Cosgrave, who, at the time, was President of Dail Éireann but was acting Defence Minister also from the resignation by Richard Mulcahy then Chief of Staff of the Army. Mulcahy had been appointed Defence Minister by the First Dail in 1919 and was succeeded by Cathal Bruagh in 1921 when he was President of the Dail, an appointment which led to a dispute with Michael Collins over control of the I.R.A., which contributed to the start of the Civil War.

When were C.C.T.V. surveillance cameras first set up in Dundalk by the local authorities?

The first cameras were erected in the main streets nearly twenty years ago by the Dundalk Town Council. The idea had been first suggested in the late 1990s but it was some years before the system came into operation in Clanbrassil Street and Church Street, under the supervision of An Garda Síochána from an operations room at the Crescent Station in the early 21st century.

What day was Market Day in old Dundalk?

Who were the Dundalk 'Woodpeckers'?

What was Dundalk's oldest Brass Band?

Which Dundalk man was the key board player for the famous 'Cotton Mill Boys'?