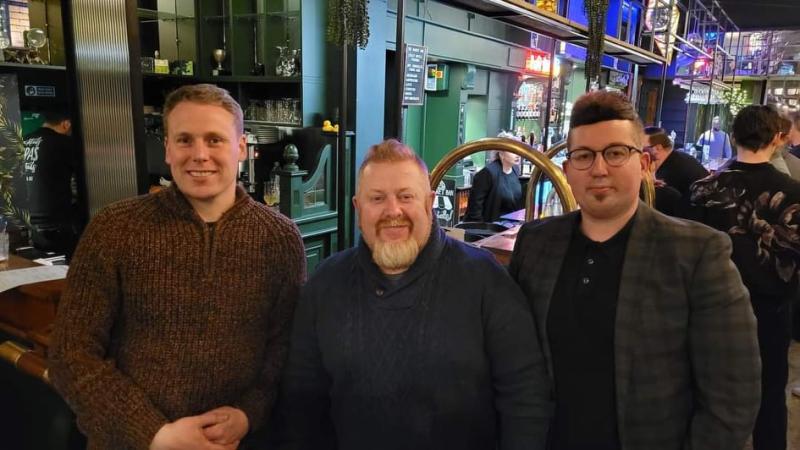 Pictured are the founders of Louth Whiskey Society, Anthony Sheehy and Lorcan Dunne, with on the left, Killowen Distillery Director, Brendan Carty

Join Louth Whiskey Society on Wednesday, April 20, in Kennedy's Railway Bar Dundalk, at 7.30pm, for The Teeling Tasting.
This tasting will explore the innovative maturation and finishing of Teeling Whiskey by Master Distiller and Blender, Alex Chasko. The tasting will include five Teeling whiskeys produced in the New Market Distillery.

The first tasting event held in November 2021 celebrated Noel Sweeney's and John Teeling's huge contribution to the Irish Whiskey landscape. Cooley Distillery was founded by John Teeling and under the expert guidance of former Master Distiller and Blender, Noel Sweeney, it went on to win numerous awards on the world stage. John Teeling went on to found the nearby Great Northern Distillery, while his children Jack and Stephen established the Teeling Distillery in Dublin.

Subsequent events explored exciting brands that are sourcing and producing their own whiskey, such as Boann, Killowen, Two Stacks and May Loag. Steven Murphy from May Loag showcased his beautifully presented range, including the Diamond, a premium ten year old blend. Brendan Carty from Killowen Distillery brought a number of bold and innovative spirits, including Killowen’s new Poitin Bulcan, made using a traditional mash bill of 50% malted oats and 50% malted barley, it is 100% smoked, and bottled at still strength. It was incredible!

Shane McCarthy from Two Stacks Irish Whiskey joined Brendan for this event, and poured the first bottling from the new Polaris Collection, a nine year old single malt, finished in Red Ice Wine, and bottled at 59.8%. The single malt used in this bottling is very fruity, bursting with pear and apple, the 6-month finishing in Red Ice Wine imparts extra flavours of cherry and strawberry.

The latest event focusing on Teeling Whiskey will showcase five samples, poured and discussed by some very special guests on the night. Teeling Whiskey is creating small batch bottlings of true character never tasted before, raising the bar for Irish Whiskey with over 300 International Whiskey Awards.

Tickets for what will be a fascinating night are limited and are expected to sell out fast.
Purchase now to avoid disappointment at: www.louthwhiskeysociety.com/upcoming-events.