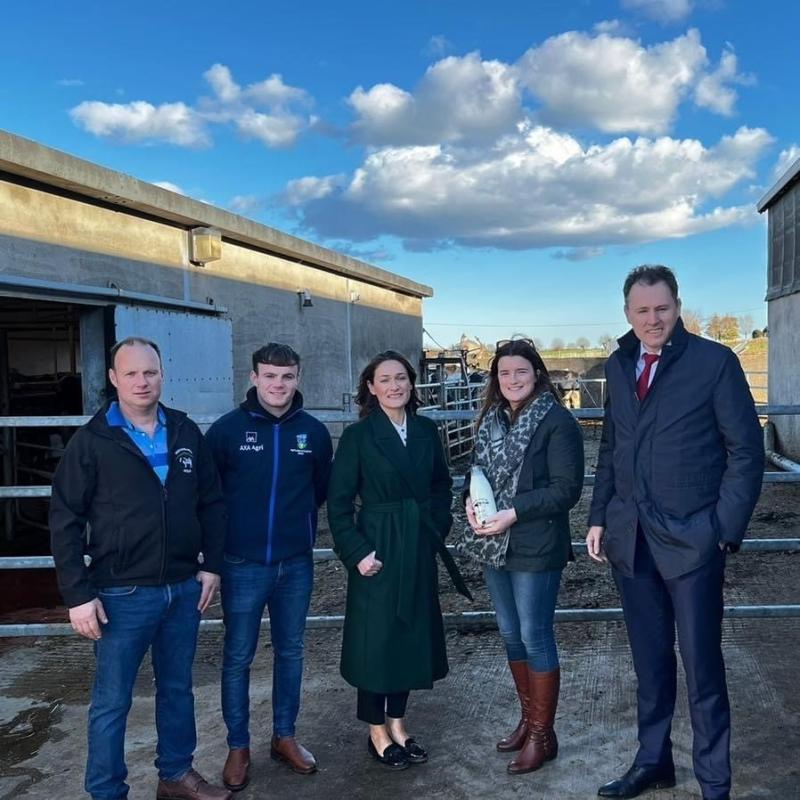 The Minister for Agriculture, Minister McConalogue, is currently on his Backing Rural Ireland nationwide tour where he is visiting many rural agriculture businesses, most of them family businesses, and supporting growers, farmers and fishers throughout Ireland.

In Louth, the first stop for Minister McConalogue and his colleague Senator McGreehan was the Olive Pork which is run by Colin Marry. A family business in the Boyne Valley. The pigs live on a natural diet enriched with olives and flaxseed, giving their pork, bacon and ham a distinctive rich flavour.

The coastal town of Clogherhead was also visited with a tour of Dundalk Bay Sea Foods, one of Ireland’s leading seafood processors. Welcomed by Cathal and Pat Lynch who are passionate about their business and ensuring they have a strong business for their family, staff and customers.

The Minister and Senator then visited Muchgrange Milk, a newly opened business run by Ciaran and Gabrielle Hanlon and family. Muchgrange Milk is a new dairy enterprise milking their own cows, bottling and selling the product on site and in various places around Louth.

Senator McGreehan said “It is so important to highlight the importance of linking the important work on a farm, the healthy environment, healthy animal to a top quality product. The visit to Muchgrange Milk really showcased what the “farm to fork” concept means.”

The final stop was Cooley Oysters operated by Donal and Nadia Ferguson, located at the beautiful coast of Carlingford Lough. One of several successful oyster farms on the Lough. Oysters farmed in Carlingford Lough are exported all around the world and enjoyed by  thousands of people.

Senator McGreehan commented, “I was delighted to welcome my colleague Minister McConalogue to our wonderful county last week and visit some of our very fine agriculture producers. The places we visited are all family run businesses and are integral to the economic make up to the people of Co. Louth.  “Olive Pork sells 100% premium Irish pork and follows the natural diet plan for their animals. They are known for their flavoursome, omega 3 filled pork.

“At Dundalk Bay Sea Foods, run by Pat Lynch and Ciaran Lynch, we received a guided tour of the premises and learned about the seafood and prawn industry. Muchgrange Milk produce all of their fresh pasteurised milk on their family farm in the Cooley Peninsula. They also supply eggs and their very own home-grown potatoes.

“We were delighted to sample some local oysters and receive a step by step tour by Donal Ferguson at Cooley Oysters which are known for their exceptional flavours with a sweet and creamy taste.

“I would like to offer my sincere thanks to all the businesses we visited. One of my favourite things is to show off our beautiful county and our fantastic people. It was an honour to have Minister Charlie McConalogue in Louth as part of his tour of Ireland and rural businesses.”