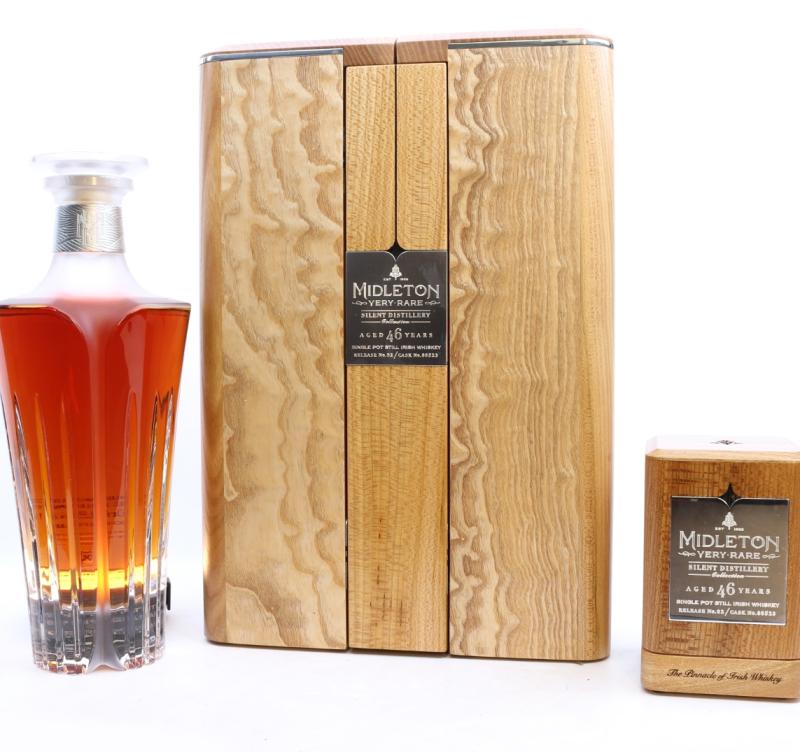 Irish whiskey continues its march to the highest levels of desirability among private collectors, with two rare bottles of Midleton Very Rare selling at auction for a combined €94,000.

The history-making whiskeys – put up for sale by private collectors – were sold separately at auction on Sunday 21st March, with both lots coming from the ultra-prestigious Midleton Very Rare Silent Distillery Collection, which has received worldwide acclaim since its first releases in 2020 and 2021.

The first – a 2020 bottling of Midleton Very Rare Silent Distillery Collection Chapter One, a 45-year-old Irish single malt from the Old Midleton Distillery which operated for 150 years from 1825-1975 – fetched a record hammer price of €48,000 (€50,952 including fees). It is the highest price paid for an Irish whiskey at public auction. One of just 48 bottles unveiled two years ago for sale in Ireland, UK, France and US, Chapter One commanded a selling price at launch of €35,000 per bottle (750ml).

It is not the first time that Irish whiskey auction site IrishWhiskeyAuctions.com has made history with Midleton Very Rare. In March 2020, it sold a bottle of Chapter One for €42,000 (€44,583 including fees), at the time making it the world’s most expensive Irish Whiskey ever sold.

“Irish Whiskey now has bottles that are comparable to the bottles of Scotch and Japanese whiskies that command ultra- premium prices on the world stage,” explains Anthony Sheehy, Founder & Owner of IrishWhiskeyAuctions.com. “It is something that we should be shouting from the roof tops to show the fantastic growth and interest that exists for Premium Irish Whiskey.”

The new record sales come as the third chapter of Midleton Very Rare Silent Distillery Collection is expected to be released, in what will eventually be a six-chapter Collection that is ushering in a new era for ultra-rare luxury Irish whiskey. The whiskey maker has previously revealed there will be one release each year from 2020 until 2025, ranging in age from 45 to 50 years old, all from the legendary Old Midleton Distillery. The Collection will culminate in 2025 with the oldest ever release to celebrate the 200th Anniversary of the Old Midleton Distillery.

Every month Irish Whiskey Auctions have charity lots which are donated by members of the whiskey community of Ireland to help raise much needed funds for local and national charities. Their first charity item on the site was in 2018 to raise money for ‘The Zoe Murphy Appeal’, a local charity in Dundalk which raised €2,222. This kind gesture inspired the couple to try and have a charity item each auction going forward.

This idea was so well received by the whiskey community that on many occasions some auctions had more than one charity item. To date they have helped raise in excess of €50,000 for various charities. Adding to the excitement of the March auction, Irish Distillers donated Bottle Number 1 from its recent Midleton Very Rare 2022 vintage release for a special charity lot, raising €11,220 for The Capuchin Day Centre, Bow Street, Dublin. Bottle Number 1 from the annual vintage release has never been available to the public in the whole 38 years of production.