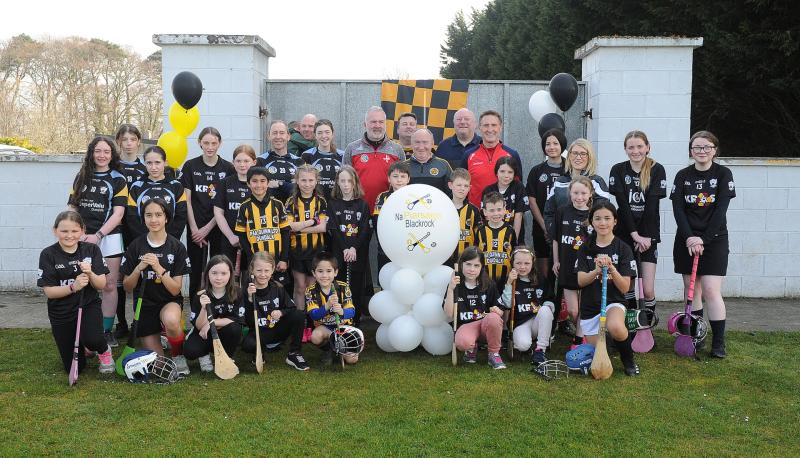 Pairc An tAthair Ui Dhubhthaigh on the Blackrock road, was the venue for the much anticipated official launch of the newly merged Na Piarsaigh / Blackrock CLG which took place on the morning of Saturday 26 March. The event was well attended by both club and county officials and in addition, players from both adult and juvenile teams were present wearing their club colours on what turned out to be a fabulous spring morning on the Blackrock Road.

The merger, according to Seamus Capplis, former chairperson of Blackrock Hurling & Camogie club, and now Chairperson of the new club’s Camogie Committee, “was a number of years in the making , and was a natural progression for the two neighbouring clubs, who had grown closely over the last four years, and especially during the pandemic”.

He went on to say that the new club is a GAA “one club”, which means that they offer all Gaelic games, including football, Ladies Gaelic football, Hurling and Camogie, all under the banner of Na Piarsaigh / Blackrock CLG.” The decision was ratified by both legacy clubs, at their respective AGM’s in January, with the new committee taking effect immediately.

“The decision to recommend the merger was an easy one for both clubs” according to Peter Begley, Chairperson of Na Piarsaigh / Blackrock CLG. “Both legacy clubs shared common goals and visions, in particular, their core values of: increasing participation; offering an inclusive sport; respect for players, opponents and officials; individual personal development; and above all, fostering better community relationships”.

In respect of community needs, Peter also stated that “now more than ever, physical health and emotional wellbeing are in focus. “ The GAA has a great tradition of helping to foster and promote community and Na Piarsaigh / Blackrock, as a GAA One club, is the perfect example of a community centric organisation, who’s core beliefs include that everyone get the opportunity to play all Gaelic sports, under one roof.”

Seamus Cahill, chairperson of the Louth Camogie County Board, commented, “we are delighted to see the merger and creation of a GAA one club. This strengthens a club’s offering by being able to play all Gaelic games. We are particularly thrilled to see camogie being made available to greater numbers of players in Dundalk and we look forward to welcoming Na Piarsaigh Blackrock CLG as a senior camogie club in the coming years”.

Peter Fitzpatrick TD, Chairperson of the Louth GAA County board stated, “it is an absolutely fantastic opportunity for boys and girls to play football camogie and hurling here on the Rock Road and I am delighted to to be able to come here this morning and wish Na Piarsaigh Blackrock the best of luck.”

Na Piarsaigh / Blackrock CLG, offers training in gaelic football, hurling and camogie for all ages from age four to senior. Over 350 adults and children are now registered, players with training taking place various nights during the week. The most up to date information is on their Facebook page, Na Piarsaigh / Blackrock CLG. For any further information, please contact club PRO Brendan Arrowsmith on 086 251 9465.