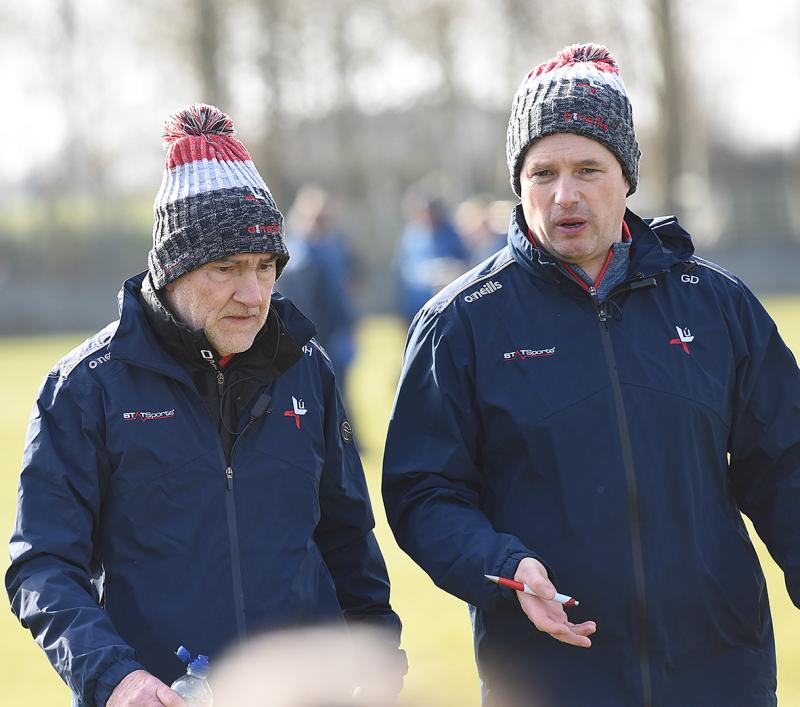 This is better than most could have imagined a month ago, Louth staring promotion to Division Two of the league in the face.

There’s still one series of Division Three matches to be played, but even if Louth are beaten by Wicklow at Aughrim on Sunday, if Limerick beat Fermanagh, and there is a winner in the match between Westmeath and Antrim, Louth would still qualify for the higher grade next season.

And more immediate, make it into the draw for this year’s Sam Maguire Cup, regardless of how they fare in the Leinster Championship.

That would see Louth side on nine points along with either Antrim or Westmeath and Limerick on ten. But having beaten Antrim and Westmeath – and, indeed, all other teams in the top half of the table – the Reds would be guaranteed a move to a higher echelon.

However, it is still possible for Louth to not go up. How that could happen is: Louth are beaten by Wicklow, Limerick draw, and there’s a winner in the Westmeath/Antrim game.

That would leave three teams on nine points; and it’s then when score difference would come into play. Louth are on just +7, worse than any of the other three and would be out of the reckoning.

But let’s leave that aside until next weekend, and instead concentrate on where the team is right now. There are many things that couldn’t have been imagined a month ago.

That Tommy Durnin would emerge as the division’s top midfielder, that Conall McKeever had so much in his locker that we didn’t know about, that Niall Sharkey would make such a wonderful transition from a forward to a back, that James Califf would find the goalkeeper jersey a perfect fit.

That Sam Mulroy would end the campaign as the entire league’s top scorer, and that Bevan Duffy, as one of the team veterans, would still be able to put in the hard years.

Okay, so Mulroy has been scoring for fun with both club and county over the past couple of seasons, and it doesn’t really come as a surprise that you’ll win more than you’ll lose backing him to score whenever he steps up to a placed kick, a penalty, free, or 45.

And being one who has kept himself in the best of shape, Duffy needed to only adapt to the program devised by Mickey Harte and Gavin Devlin to slot into any of the roles he has been asked to play.

The St Fechin’s clubman has looked at home at full-back for the last couple of games - before that he had several different numbers on his back and wasn’t out of place in any of them.

What’s great about McKeever and Sharkey is their turn of speed, allied to their willingness to take a straight route most times. Many of their runs against Antrim were defence-splitting, and though the team is not averse to moving sideways, sometimes backways, the two lads wouldn’t be going against instructions when they challenge the opposition to stop them.

Whether or not he has benefitted from a switch from junior to senior club fare, midfielder Durnin is playing his best county football. He can catch and can score, and because he has an engine that fires on all cylinders, he covers as much ground in the final quarter as he does in the first. His second-half performance on Sunday was arguably his best-ever in the county jersey.

Califf is growing in confidence with every outing. Coming under the influence of former Dundalk goalkeeper and experienced coach, Steve Williams, he showed against Fermanagh how good a stop-stopper he is.

And in the Antrim game, he got tremendous length into his kick-outs. When there’s someone as useful in the air as Durnin to use as a target, with more than a fifty-fifty chance of winning possession, it’s a good alternative to going short.

If Sunday’s host club, St Mary’s, are harbouring strong hopes of regaining the Joe Ward Cup, it may be because of the number of players they have on the county panel.

There are five, the Jackson brothers, Liam and Tom, Donal McKenny, Ciaran Keenan, who’s been troubled with injury, and Daire McConnon, and while the first four have been around, so to speak, McConnon, having freed himself of injury, has only made his mark in recent games. He’s one to watch.

There are others who have contributed handsomely to the promotion drive, the likes of Dan Corcoran, Eoghan Callaghan, the St Patrick’s trio of Martin McEneaney, Leonard Gray, and Jack Murphy. Ciaran Downey, John Clutterbuck, Ryan Burns and Ciaran Byrne also.

But for injury, Conor Grimes and Conor Early would have been included on Sunday, while a lengthy spell on the easy-list has stalled the inter-county career of the Dreadnots pair, Anthony Williams and Dermot Campbell.

That it has all come together in such a short space is a tribute to the back-up team, Harte and Devlin in particular.  Three points from the first four on offer boded ill, but then came that win against Limerick.

That was the campaign-turner. It was followed by a hard-earned win over Westmeath, another in the away meeting with Fermanagh which followed, and then this, not by any means the team’s best performance, but one good enough to beat a poor Antrim side and make promotion a near certainty.

Less than two years in the job, Harte has already a couple of decent achievements to his credit. He took over a Division Four team, and when next season’s league begins, the strong possibility is he’ll be planning for matches with Meath, Cavan, maybe Monaghan, maybe Kildare, and, whisper it, maybe Dublin.

In the meantime, there’ll hopefully be a Division Three final to be followed by a Leinster championship which could – maybe should – go beyond a first round meeting with Carlow. The winners play Kildare.

But regardless of how the provincial series goes, there should be another championship outing, this one against any of the fifteen top-flight teams in the chase for All-Ireland honours. The future has a healthy look about it.

Inside Track: Tiger’s defeat was the early story from Cheltenham