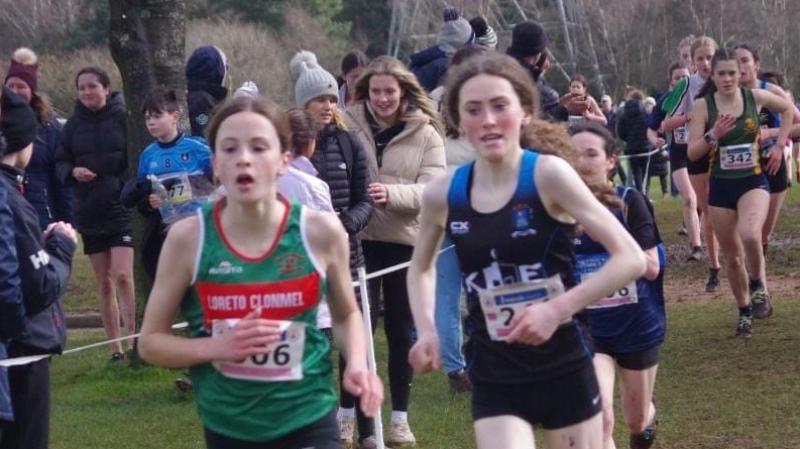 Dearbhla Allen, right, in action in Belfast at the All Ireland Schools Cross Country Championships

Last weekend the St Peter’s AC had two athletes travel to Mallusk Belfast for the All Ireland Schools Cross Country Championship. Dearbhla Allen, who has enjoyed a very successful Cross Country Season in both her club and her St Marys (Marist ) Dundalk singlet had yet another good performance, this time in the Junior girls race.

She got off to a good start and was in 2nd place up to the half way point, but her lead from the chasing pack was swallowed up and with about 500M to go Allen was back in 8th place. But this determined young athlete was eager to give it her all and that she did.

As they turned for home Dearbhla came back and passed two of her competitors to finish in a fantastic 6th place and earn herself the last of the individual medals, as just the top six win medals at the All Ireland Schools.

This has been a fantastic Cross Country season for Dearbhla and her next race will be her biggest yet when she makes her International debut as part of the Irish schools team that will travel to Wales for the upcoming SIAB Cross Country event which will take place on Saturday the 26th of March.

Just like every other race Dearbhla has ever done, standing beside her on the start line will be Ace AC and Sacred Heart school athlete Eimear Cooney, with both Louth athletes qualifying for the National team.

The St Peter’s Club also had Niamh Brady run in the girls Senior race. Unfortunately for Niamh she had been out sick in the lead up to the race and was unable to train, yet she still decided to run.

Qualifying for the All Ireland schools is an achievement in itself and Niamh has managed to do this throughout her School Athletics career and will hopefully be fully recovered when she competes at the National Indoor Championships.

While Dearbhla and Niamh were battling in the muck in Mallusk, Judith Bell was in action in the AIT arena in Athlone. Judith, having already qualified for the National Championships in both the 60M hurdles and the Long Jump was attempting to achieve the same feet when she competed in the Leinster U18 girls high jump.

Most athletes would be happy to qualify in one event, but with a leap of 1.40M Judith was once again on the podium winning a provincial bronze medal and once again qualified for the National indoor championship.

The previous weekend Tom McGrane travelled across the Irish Sea and competed as a guest at the British Masters Championship in London as a guest. Tom is currently enjoying a rich vein of form and threw another season best to take the silver medal with a putt of 9.42M.

This weekend's local GAA fixtures as knock out stages commence

Dundalk Scouts save the day with St Patrick's Day parade

Scout parade the only parade in Dundalk today